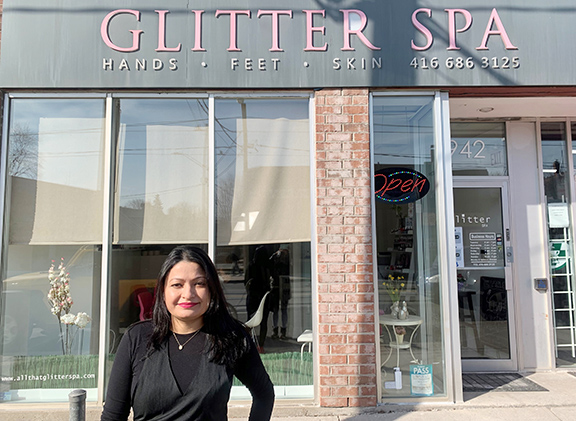 Muna Shrestha is the owner of Glitter Spa on Kingston Road. Photo by Mimi Liliefeldt.

Most of us think we know how lucky we are. Aside from a few curveballs our lives have turned out pretty much as we’d expected. A smaller but growing number, however, are living lives they never could’ve dreamt were possible.

Muna Shrestha, owner of Glitter Spa on Kingston Road near Lawlor Avenue, is one such person living a vastly different reality from what she knew as a child. She is an unsuspecting force with her unique combination of calm, determination, and an easy laugh. When Muna laughs, you automatically want to share in her joy.

Muna was born and raised in Pipaldanda, a village in Nepal that at the time was so small there were no cars or bikes. She grew up on her parents’ farm where they were completely self-sufficient.

“We had fruits, vegetables, rice, everything grows there. We also had chickens and goats,” Muna told me. “I’m the youngest with three brothers and three sisters, we all worked on the farm.”

In a town with no transportation, going to school was a long endeavour. “We had to walk an hour to school and an hour back, and there was a big river. You had to swim across it to get to school. So, my clothes would be wet but they would dry by the time I finished walking to school. In winter I didn’t go to school because it’s too cold to cross the river.”

Though Muna’s mother had never been to school, she was a bright woman who always encouraged her children to continue their education. For her final years of secondary school Muna had to move to Kathmandu as there were no options to do so in Pipaldanda.

In order to get to Kathmandu, she had to overcome the initial challenge of getting to the airport. “From home to the airport we had to walk eight hours with all my bags. My mother found someone to help us carry the bags, but it was still a lot of struggle,” she said.

“I was super nervous to go. We didn’t even have electricity in my town. We used oil lamps to see at night. When I got to Kathmandu, I thought it was so fancy! It was always so bright, even at night,” Muna told me as my mind reeled at the thought.

The next part of Muna’s story may trigger our western mind to judge, but please remember that many cultures operate very differently than others and it is not up to us to decide what’s best.

Moving to Kathmandu changed Muna’s life trajectory. A friend at school thought she would be a good match for his uncle and unbeknownst to Muna, he showed his uncle her photo. The uncle saw the photo of Muna and was smitten. A meeting was arranged by Muna’s older brother who also lived in Kathmandu and had the authority to grant permission for her marriage.

Soon after an 18-year-old Muna provided a tea service for her potential new husband who was 12 years her senior.

“I was so nervous to see him, my hands were shaking. But if my brother and auntie said he was a good person I was willing to blindly trust them,” she told me. “My aunt asked me how I feel, and I said, ‘I don’t know, if you guys decide it’s OK, then it’s OK,’ and he seemed nice and he looked really handsome. So, we married a week later. It was very fast. I didn’t even know his name! The day after the wedding, my mother-in-law kept talking about ‘Kuber’ and I asked, ‘who is Kuber?’ She said, ‘your husband’s name is Kuber.’”

Muna is very good natured while telling her story, and fully acknowledges the absurdity of not knowing her husband’s name at the time of their wedding, but she also accepts that for her growing up at that time in her culture arranged marriages were a normal part of life.

At first married life was challenging as they got to know each other, but Kuber truly adored and cared for Muna and their love grew naturally. Four years after their daughter was born, Kuber was sponsored by his nephew who had moved to Canada. He was gone for two years and during that period Muna went to aesthetician school in Kathmandu and started working in her field.

In February 2009 it was time for the big move. Muna said, “I was excited by the opportunity to come to Canada. I felt like it’s going to be a better life for my kids.”

But uprooting your life and trying to adapt to a brand-new country and culture is a huge undertaking.

“It was way harder than I thought it would be. It was freezing cold; I was struggling with English and Kuber was working in a factory making very little money. I felt like I was behind, starting all over,” Muna admitted.

However, she was determined to move their life forward; she took ESL classes, and eventually got her first job as a cleaner at a Comfort Inn. On her first official day on the job she had the absolute worst-case scenario. Trust me when I say most of us would have quit on the spot. But not Muna. Not only did she get the job done, but at their Christmas party months later she was awarded cleaner of the year.

As nice as the recognition was, Muna knew this was not the life for her. She had already started working towards an aesthetician certificate here in Canada while working part time.

In April 2011, she completed her one-year course and immediately applied for a job at Glitter Spa; she was hired on the spot.

After only a year, Muna’s friendly nature and exceptional work ethic gave the owner of the spa enough confidence to leave her in charge while she went on extended maternity leave. She worked seven days a week. While working full time at the spa, she did side jobs from home in her ‘off’ hours.

She said, “I would finish 8 p.m. here and then I get home and I would work until midnight. It wasn’t easy, but every penny counted.”

The spa was doing very well and Muna had excellent relationships with her clients, but she knew it was time for her to move on.

“I was ready to open my own. I told the owner I was thinking of leaving and then she said, ‘why don’t you buy Glitter Spa? It will be much easier for you than starting over’. I was quite happy to hear that,” Muna told me.

Muna has owned Glitter Spa since April 2016. She continues to work hard as an entrepreneur and mother of two.

Her young son can’t comprehend the world his mother grew up in. “My son doesn’t believe me, he asks me what my favourite dolls or TV shows were, and I tell him, ‘What dolls? I didn’t watch TV, I didn’t even have electricity,’” she said.

Ultimately, this is why many newcomers to Canada work as hard as they do. They do not take this life for granted. Muna is highly aware of the privilege her children have for being able to grow up here and is so grateful for it.

“I want my kids to be free to make their own choices. I could never have imagined this life. I love my clients and I’m so thankful I can help people. I also have always sent money back home to support my family. That makes me so happy that I can do that. I’m proud of myself,” she beamed.

Luck may have helped bring Muna and her family to Canada, but her success is completely her own.

If you enjoy articles like these, please help us in celebrating the Beach Metro’s 50th anniversary by considering a financial donation to the Beach Metro Community News. This non-profit community run paper has been the observer and reporter of all our neighbourhood highs and lows. It has also helped support and educate us on many important people, places and events that affect our community. With your help we hope to keep our beloved paper going for at least another 50 years! Thank you so much for your readership!

Muna and her family are wonderful people and I have never met a woman who is as determined, focused, courageous, kind, humble and as Muna. My heart swells to see her successes which she has worked so hard towards.

Muna remembers every detail of her clients experience. It’s that personal attention that keeps me coming back. Beautiful story of a wonderful woman.

Muna is such a wonderful person. She makes every client feel special and welcomed. My mom used to take my young son with her for pedicures and he loved Muna too, and she painted his toenails pink, which he chose and loved! It’s so lovely to see such a warm, hard-working person being celebrated here.

Thank you for sharing your journey with us Muna! You are an incredible woman and mother. Thank you for being such an inspiration and for all that you do. ♥️