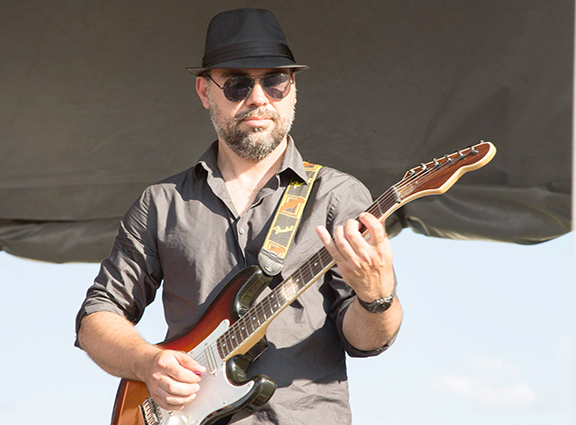 Fabio Dwyer will be special guest at the Friday Night Blues Jam session on March 25 at the Black Swan on Danforth Avenue. Photo: Submitted.

Fabio Dwyer is a Beach musician, a professional guitarist and co-owner, with his wife Laura Savage, of the Mill House School of Music (previously located at Dawes Road and Danforth Avenue, and now on St. Clair Avenue East).

He was a founding member of a local band, has freelanced with a wide array of groups playing everything from rock, blues, jazz and pop to Latin and Brazilian music throughout Ontario. Fabio has released two solo albums and developed the soundtrack for two movies.

You might have heard him play at a Friday Night Blues Jam session, held for several years at the Salty Dog on Queen Street East in the Beach and more recently at the Black Swan on the Danforth.

In 2017, after a slow progression from the fatigue and depression that began in 2012, to the loss of motor skills that included difficulty walking, talking, swallowing and the most difficult of all for a guitarist, the full use of his right hand, Fabio was diagnosed with Parkinson’s disease.

“I managed to play a little for the first two years following diagnosis,” said Fabio, “but by 2019, I couldn’t play at all. For a musician that’s like a death sentence.”

His one glimmer of hope was that he was a candidate for deep brain stimulation — a procedure that uses implanted electrodes and electrical stimulation to treat movement disorders associated with Parkinson’s and other neurological conditions. On Oct. 3, 2021 Fabio underwent the surgery at the Toronto Western Hospital and six weeks later (a time that allowed the brain to heal) the doctors switched on the device.

“It was like a miracle. My tremors were reduced by 95 per cent and I could walk, talk, swallow, smile and wipe my butt, but most of all, after three of the 11 adjustment sessions, I’d recovered 85 per cent of my guitar playing. I continue to improve,” he said.

“My musician friends have been great. They’ve spent hours giving me musical workouts. One of my first was a four-hour session with Mike Sedgewick who is another Beacher and the host and organizer of the Friday Night Blues Jam. He really stretched my musical muscles.  I would never have made it if not for my friends and family, especially Laura my partner in life and in business.”

Besides his workouts with Mike and his other musician friends, Fabio has been busy making up for lost time recording the music he wrote during the years he couldn’t play, and he’s bringing his high energy blues music back onstage. His first appearance after the operation was in December, 2021 at The Grover on Kingston Road.

“Today, I’m 95 per cent better,” said Fabio. “Deep brain stimulation is not a cure and not everyone is a candidate, but for me it worked and I’m able to fight the motor symptoms of Parkinson’s on equal grounds.”

If you want to enjoy some great music and maybe even catch Fabio on guitar, check out the schedule for Friday Night Blues Jam on Facebook at https://www.facebook.com/Mike.Sedgewick.Blues.Jam

Fabio will be the special guest at the jam on March 25.

If you want to learn to play an instrument or improve your skills, check out the Mill House School of Music’s website at https://www.millhousemusic.com

Welcome backmFabio hope to jam with you soon

I was diagnosed with Parkinson’s disease a year ago at the age of 67. For several months I had noticed tremors in my right hand and the shaking of my right foot when I was sitting. My normally beautiful cursive writing was now small cramped printing. And I tended to lose my balance. Neurologist had me walk down the hall and said I didn’t swing my right arm. I had never noticed! I was in denial for a while as there is no history in my family of parents and five older siblings, but I had to accept I had classic symptoms. I was taking amantadine and carbidopa/levodopa and was about to start physical therapy to strengthen muscles. Finally, I was introduced to Kycuyu Health Clinic and their effective Parkinson’s herbal protocol. This protocol relieved symptoms significantly, even better than the medications I was given. After I completed the treatment, all symptoms were gone. I live a more productive life. I was fortunate to have the loving support of my husband and family. I make it a point to appreciate every day!