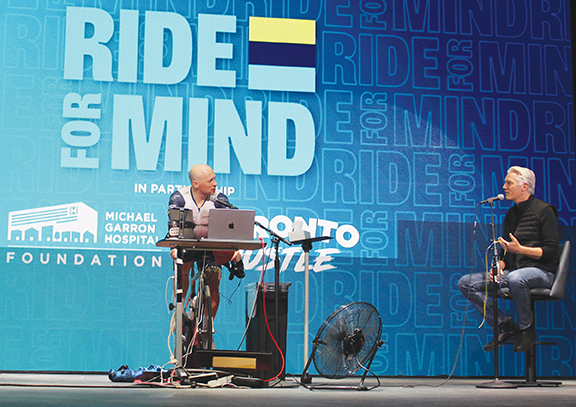 Photo above, Beaches-East York Councillor Brad Bradford chats on stage with local resident Allan Reid, President and CEO of the Canadian Academy of Recording Arts and Sciences/ The JUNO Awards on Saturday morning at Ride for Mind. Inset photos: Bradford chats virtually with Jamie Lee Rattray, of the gold medal winning Canadian Women's Olympic Hockey Team; and riders on their stationary bikes at the History music and entertainment venue in the Beach. Photos by Alan Shackleton.

While it was cyclists, not musicians, on stage at the History music and entertainment venue in the Beach Saturday morning, there was plenty of energy and excitement in the room as the Ride for Mind fundraiser entered its final stretch.

Bradford, through his association with Toronto Hustle, is one of the organizers of the event.

“We’re working our physical muscles and raising money for our mental muscles,” said Bradford during an interview with Beach Metro Community News on Saturday morning at History.

Participants in Ride for Mind can take part as an individual riding for the entire 24 hours themselves, or as part of a team of riders each taking a portion of time on the stationary bike.

This is the third year for the event which took place entirely virtually in 2020 (when it was called CRUSH COVID) and 2021. For 2022, Ride for Mind offers the option of taking part online or on stationary bikes at History.

For Bradford, who is riding the full 24 hours himself as he did the last two years as well, having people together at the event in person at a concert hall is a huge energy and motivational boost.

“I did the first two from my living room, so this hybrid (mixing both virtual and in person) really builds the energy. When we’re not talking to people online we’ve got the music pumping in the room and we’re going to be having some live performances later today.”

On Saturday, morning Bradford was riding his bike and chatting on stage with local resident Allan Reid, President and CEO of the Canadian Academy of Recording Arts and Sciences/ The JUNO Awards. Right after that, Canadian Women’s Hockey Team member Jamie Lee Rattray joined in virtually for a chat while she rode her own stationary bike at home.

Bradford talked with her about resiliency, mental toughness and the gold medal win by the Canadian Women’s Hockey Team at the Beijing Winter Olympics last month.

Others who have dropped in personally or virtually to either take part or offer their support included three-time Olympic cycling medalist Curt Harnett, a member of the Order of Canada; Brianne Jenner of the Canadian Women’s Hockey Team; and Adam Van Kouverden, an Olympic gold medal winner in kayak and the current MP for Milton.

The entire event is being livestreamed, and people can go online to watch or make donations at https://mghf.akaraisin.com/ui/rideformind

Bradford said the support from so many people for Ride for Mind, both from Canada and internationally, is extremely motivating.

“We’ve had some great guests come in,” he said. “Olympic athletes, politicians, cyclists from around the world including Australia, Germany, the U.S. and across Canada.”

While Bradford has become the face of Ride for Mind and is the host for the guests who come in, he said it is a huge team effort of volunteers from Toronto Hustle and Michael Garron Hospital that the make the event a success. “It’s all the volunteers who do it. The ones you don’t see and make everything work and give it such a high production value here, and make it so appealing and fun. They care about mental health in the community.”

Bradford also thanked History and Live Nationa Canada for making their newly opened venue on Queen Street East available for Ride for Mind, given that they will be starting live concerts again next week as pandemic restrictions ease.

“We had the opportunity to hold it here due to the unique circumstances and timing of the pandemic restrictions. It came together and has really worked out,” he said.

“The pandemic has been so isolating so to be able to have an event in the neighbourhood means so much,” added Bradford.