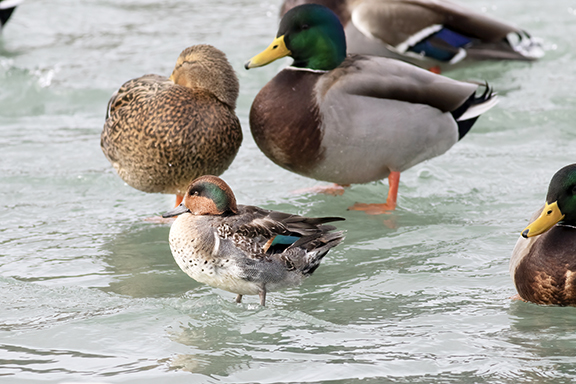 Photo above shows a smaller green-winged teal visiting with a group of mallards on Lake Ontario. Inset photos show a King eider walking regally and a long-tailed duck. Photos by Ann Brokelman.

I’m going to guess that if someone asked you to picture a duck, the first thing to come to mind would either be a common mallard (either the brown female or the green-headed male), or a cartoon of Daffy/Donald variety.

Did you know that there are about a dozen different family groups of ducks, many of which are found here in Ontario?

During our winter months, the Toronto beaches provide open water for a wide variety of striking ducks that have come all the way south from the Arctic and northern waters. From the long-tailed duck, common and king eider, and green-winged teal, all are worth checking out if you can find the time.

There are more Arctic ducks that visit our neck of the woods, but, today, I will focus on three special ones that I regularly see in winter along Lake Ontario. I’ve found two green-winged teal ducks on the lake in just the last few weeks. The teal is the smallest of the North American dabbling ducks.

What is a dabbling duck you ask? It’s one of those duck families that I mentioned above, and its members are characterized by the way they feed.

I’m sure you’ve all seen an image of, or even live, a duck sticking its head underwater with its feet and tail feathers up in the air. That’s dabbling, and not all ducks do it!

While these ducks can swim underwater, they rarely submerge their whole body.

Green-winged teals will dive underwater when they think a predator is nearby, but that’s about it.

I’m always amazed at the size difference between mallards and green-winged teals, as the teals can be less than half the size of their cousins.

How do you know you’ve spotted one? Well, the green-winged teal has a notable patch of teal colouring on its wing. They also have an iconic green patch that goes from their eye around to the back of their head. These birds can fly as fast as 97km/h (60mph) and mostly eat seeds, stems, and the leaves of aquatic vegetation. In my mind, the most accurate word to describes them is: Cute. The king eider is another amazing duck that visits us this time of year. The eider is one of the many sea ducks, who, as you can probably guess, generally live alongside the sea. I imagine Lake Ontario is a little disappointing for them, compared to Hudson Bay and the Arctic Ocean, but they come to visit, nonetheless.

They are diving ducks, which means they fully submerge themselves while looking for food. King eider’s have been observed going over 45 metres, (150 feet), below the surface. They need to go deep to find the crustaceans and mussels, which they love to eat, on the bottom of the sea. They are well adapted to frigid climates and are regularly seen resting on ice floes.

Maybe Lake Ontario for them is like the Caribbean Sea for the rest of us! One of the last times I saw one of these birds was a few years ago. A juvenile walked out of the water, its chest held high and puffed out, and I thought it really had a royal, and pompous, air about it. It really strutted around like he was the king of the water.

My friend Carol LaPointe once told me that the long-tailed duck looks like someone took an incredibly fine brush and meticulously painted each and every feather. The more I see them, the more I agree. This eye-catching duck, with its impressive tailfeathers, is another sea duck that will fully immerse itself looking for food.

I’ve observed these birds, a few times, take off, zoom around in a short circle, land and then dive headfirst and disappear into the lake. This duck can actually reach a depth of 60m, (200ft).

How about one more notable fact about these birds? I often hear these birds long before I see them.

The next time you hear yodelling down by the lake it may not actually be your Swiss neighbour, but the beautiful long tailed duck. Or, maybe it’s both.

Thanks Ann for your insights and delightful duck descriptions. On our most miserable winter days I love that our waterfront ducks are here for the balmy weather.