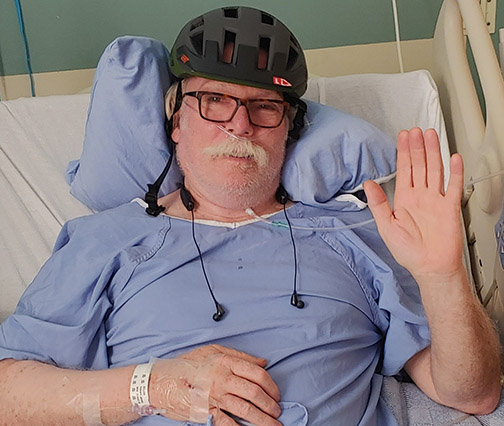 Tedd Dillon is seen in this photo from last October, shortly after the collision with an unleashed dog that knocked him off his bike on the Martin Goodman Trail in the Beach. Dillon suffered a broken pelvis and is still recovering from his injuries months later.

Tedd Dillon has a date with his doctors today to see how his broken pelvis is healing some four months after he was knocked off his bike by an unleashed dog while cycling in the Beach.

Dillon, 69, was finally able to come home in late January after the Oct. 15, 2021 incident on the Martin Goodman Trail near the Kew Beach tennis courts.

Since the crash, in which an unleashed dog ran into the front of Dillon’s bike and caused him to fall to the ground, he has been in hospital and then a rehab facility getting his strength back.

“It’s been a long haul,” he told Beach Metro Community News in an interview earlier this month. “I only lay on a bed for the first while.”

As a result of the collision with the dog, Dillon suffered three fractures on the right side of his pelvis, along with a broken sacrum and coccyx. He said his pelvis was “shattered on the left side” and he was still not able to bear weight on it.

The purpose of his doctor’s visit on Feb. 17 will be to see if he will finally be able to put weight on his left side.

After the collision, Dillon was taken to Michael Garron Hospital for treatment and he was there for three weeks. He was on forced oxygen, and blood thinners and had a pulmonary embolism.

After a brief stay at another facility, he was then moved to Bridgepoint Rehab in Riverdale on Dec. 9 where he started physiotherapy.

Dillon said he has nothing but praise for the hardworking staff members at both Michael Garron Hospital and Bridgepoint.

He said he was “full of pain and fear” when he first arrived at Michael Garron Hospital.

When transferred to Bridgepoint, they soon had him doing physio. “It’s a fabulous medical facility,” said Dillon. “I’d been pretty much eight weeks on my back healing and not moving at all..I couldn’t. They rolled me over like a log to start to get me moving.”

The physiotherapists at Bridgepoint told him he had to get moving as much as possible.

“I got a wheelchair and would be taken to physio. They would do exercises on a flat bed on my right and left legs,” said Dillon.

Along with regaining some strength, the experience has also given Dillon an appreciation and understanding of the work done by PSWs (Personal Support Workers) in the healthcare system.

“My heart goes out to the healthcare workers who are overworked and underpaid,” he said.

“I was so fearful when they had to roll me. They cradled my left leg like it was a baby, and it was done with such love. I experienced that and I am moved to the end of my days by that. It’s a hard haul for them and I wish they were paid a better wage.”

Dillon doesn’t know what he’ll hear from doctors today regarding his left side, but is hopeful he will up and walking and bearing weight on both legs at some time in the near future.

He said during physio a fellow patient joked with him about what he would do when he was walking again. They warned him not to walk down to the Beach looking for the dog that hit him and the people who own it.

Dillon said that while the community tried to find the owners of the dog, who were rollerblading with it while unleashed along the trail, he has no idea who they were. They did not stay around to help him after he was knocked from his bike.

Police looked into the incident, but unleashed dogs are under city bylaws and are not considered a criminal matter, said Dillon.

“The accident is under the bylaw infraction of dog not on a leash. It can’t be a criminal charge.”

However, he considers the dog’s owners negligent and responsible for his injuries.

“No criminal case but could be a civil case if we ever find them,” said Dillon. “There are parts of the Beach where dogs can run free but certainly not on the Boardwalk or bike path.”

Though it has been a painful and frustrating few months for Dillon, he said he is extremely grateful for all of the support he has been given.

“I’m very grateful to my family, and I really see the value of family as there were people in hospital with no family. And also to my friends who helped me out, and reinforced the value of community. I could not have done it by myself. The strength of community cannot be overstated.”