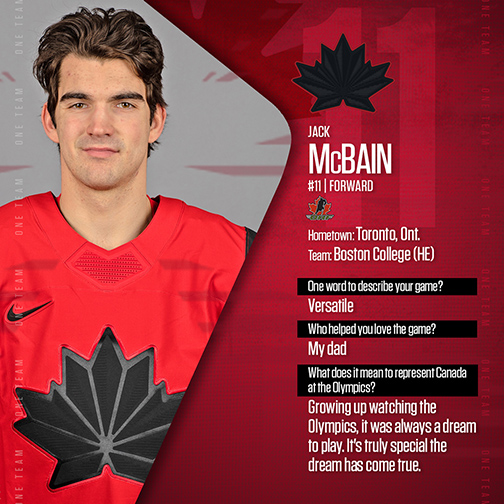 Beacher Jack McBain, who attended Malvern Collegiate, was a member of the Canadian Men's Hockey Team at the Winter Olympics in Beijing, China. Image: Hockey Canada.

The Canadian Men’s Hockey Team lost 2-0 to Sweden this morning in what was a close quarterfinal game at the Beijing Winter Olympics.

The loss eliminates Canada from the medal hunt at this year’s Winter Olympics.

Beacher Jack McBain, who scored for Canada the day before in a 7-2 win over China on Feb. 15, started the game working hard, making plays, and pressuring the Swedish defence. He was penalized for interference in the first period, but Canada killed the penalty.

McBain was playing on Canada’s top line in the third period and was on the ice for Sweden’s first goal which was notched with 9:45 left in the period.

After the goal, a frustrated McBain skated to the Canadian bench and snapped his stick on the boards.

In the last few minutes of the match, Canada launched an all-out assault to try and tie it up but Sweden scored an empty-netter to secure the win.

The Swedish team will go on to face the Russian Olympic Committee in the semifinals.