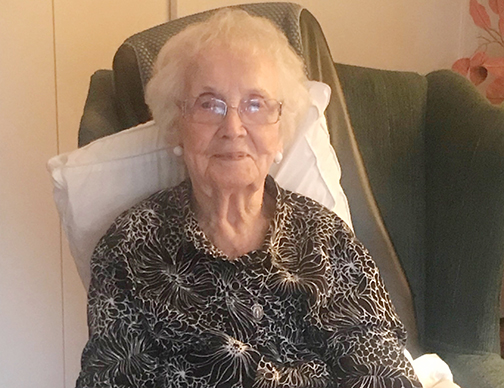 Theresa Cooper will be celebrating her 100th birthday on Feb. 9. Photo above shows Theresa last week. Inset photo shows Theresa at the age of 23. Photos submitted.

A life-long Beach resident, Theresa Cooper will celebrate her 100th birthday on Feb. 9.

Born at home on Gainsborough Avenue in 1922, Theresa Budway first attended St. Brigid’s Catholic School and then later St. John Catholic School after her family moved to Willow Avenue when she was seven years old. Theresa attended Eastern Commerce High School and then went to Shaw’s Business College, which was located at Wineva Avenue and Queen Street East in the Beach.

When the Second World War began, Theresa worked as a civilian with the Royal Canadian Air Force.

In 1939 she met Roy Cooper and they were married in 1946 at St. John’s Catholic Church on Kingston Road. The couple then moved to the Wineva and Queen area where they raised their six children — Michael, Theresa, Leona, Mary, Joseph, and Bernadette.

Daughter Mary said her mother remembers shopping at stores in the Beach such as Kresge, Woolworths, Ostranders Jewellers, Littlefair’s Butcher, and the Daw’s and Women’s bakeries.

Theresa was at home raising the family through until 1965, when she took an executive secretary job with the Y.M.C.A. at Yonge Street and Eglinton Avenue. Theresa worked there until 1982.

In 2000, Theresa moved to the Upper Beach from the Queen and Wineva area.

Mary said her mother is an active parishioner at St. John’s Catholic Church as she has been since she joined at the age of seven, 93 years ago.

“She is the Matriarch to us all,” Mary told Beach Metro Community News. “She enjoys her many friends in the Beach area and is looking forward to many more luncheons and suppers in the local restaurants.”