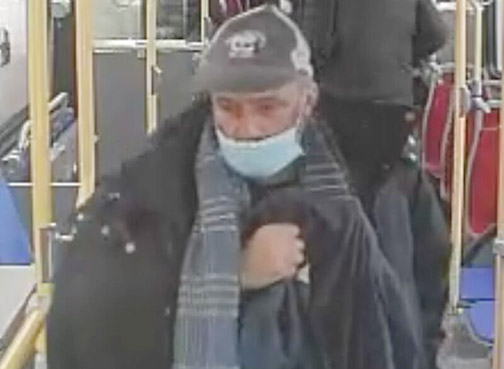 Police have released this security camera image of a man in connection with an investigation into an alleged indecent act on a TTC bus in the Beach on Saturday, Feb. 5. Inset photo shows the suspect with a black bag with red lettering on it.

Toronto police are requesting the public’s assistance in identifying a suspect wanted in connection an investigation into an alleged indecent act on a TTC bus in the Queen Street East and Wineva Avenue area of the Beach last weekend.

According to a police press release on Feb. 9, a man boarded a TTC bus in the area on Saturday, Feb. 5 and he was observed to be allegedly staring at female patrons and exposing himself.

The same man is believed to be involved in a similar incident that occurred on Friday, Oct. 3, 2021 in the Main Street and Kingston Road area, police alleged. The man was described as 40-50 years of age, five-feet, eight-inches tall, with a medium build. He was carrying a small black suitcase with red writing that stated “CCM” or “CCC” on the side, police said.

Police are concerned there may be other victims and ask that anyone who has information relating to this investigation contact Det. Const. Greg Yan at 10779@tps.ca or 416-808-5507.

Anyone with more information on this incident or the identity of the suspect can also contact Crime Stoppers anonymously at  at 416-222-8477 or online at https://www.222tips.com