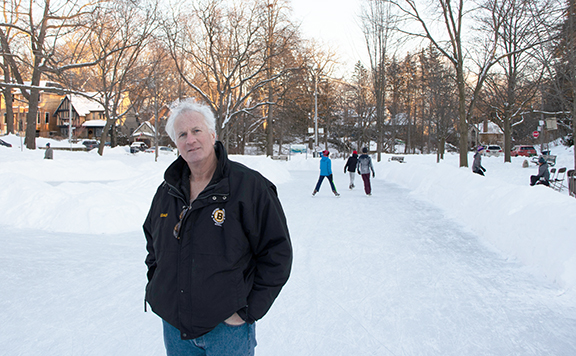 Thomas Neal stands on the rink he builds each winter in the Glen Stewart Ravine. Inset photos show the sun setting on, and the volunteers who helped shovel after the Jan. 17 snowstorm, at Norwood Park; and people skating on one of the two rinks at Fairmount Park.

Thomas Neal, a realtor, father of three and a Beach resident, has being putting up an outdoor skating rink by pretty much by himself for close to 15 years now.

“It’s a privilege to build it here. You know, I’m privileged to be able to build it in such a beautiful central location in the heart of the Beach,” said Neal.

His labour of love is in a “bowl” in the in the Glen Stewart Ravine, just north of Queen Street East by Glen Manor Drive.

In 2012, Neal was named Beach Citizen of the Year for his many contributions to the community including the building of the Glen Stewart rink.

During a recent visit to the rink, there were many children and a few families looking very content to be skating and playing hockey.

As Neal explained, he brought his son to the rink in 1999. But when he tried to do the same in 2000, there was no longer a rink. Neal said he had a talk with then Beaches-East York Councilor Sandra Bussin and started building the rink himself, with the help of a few neighbours.

Although Neal doesn’t say so, building and caring for the rink can be a lot of work. Neal will come out early in the morning or late at night to shovel and flood the ice.

One of the challenges Neal runs into is people walking on the ice when it is warmer than usual. It can make a footprint that freezes when the temperature cools. Neal then has to scrape off any footprints.

One tip Neal has for anyone considering setting up an outdoor rink is to pay attention to the weather.

For example, it’s best to wait until the ground is solidly frozen, minus 10 Celsius or colder, before putting the water down. And if it is particularly cold, one can only water the ice a bit at a time. Otherwise little waves will freeze into the ice.

Another volunteer outdoor rink builder is Edward Belanger. He is part of a group of local residents who set up and maintain the ice at Norwood Park, southwest of Main Street. Belanger said it can be a challenge at times, but there are close to 40 volunteers that help maintain the rink. Every night about two to four people come out to flood the ice.

Belanger said the rink is an important spot for many people in the surrounding community.

When children were getting too stressed from when they had to do online learning, going skating during the day can be a release, he said. Many local teens will spend Saturday nights having fun on the ice and help out with the flooding and shovelling of the rink as well.

Belanger also mentioned a late night hockey game with his friends, all of them grown men. They ended the game and, walking home, said goodnight to each other. “It’s like we’re teenagers again. It’s awesome,” said Belanger. As a result of the storm on Jan. 17, Belanger estimated the rink was covered with 40 centimeters of snow. It was an intimidating situation. But they sent the call out for help via email. By 3:30 p.m. there were about 30 people moving the snow off the ice. In three hours, the job was done and the ice was clear for skating.

Belanger advised a different rink building approach than Neal. Neal does most of the work himself. Belanger likes to have many people to come out and shovel the snow or flood the ice. This also helps build community pride in the rink.

For the Norwood Park rink, they even have a person, Dolora Harvey, who handles the emails and organizing who does what when.

To get an idea of how it can work, Belanger suggested going around to the various rinks in the community and talking to people about how they care for them.

Some of those rinks are by Love Crescent Parkette, Blantyre Park, Lynndale Parkette, and Woodbine Park, said Neal.

The flagships of the community rinks, though, are in Fairmount Park. The group managing the creation and maintenance of the two ice surfaces are known as The Ice Masters, and they even have a laneway in the community named after them.

Adam Elliott is one of the Farimount Park Ice Masters, and he said it is a big community effort that helps build the rinks.There are about 80 volunteers, and many of them have children or grandchildren who have learned to skate there. People want to have the rinks for the local children’s enjoyment, said Elliott

Also, for some of the adults, helping out the community just seems to make sense. Elliott said that he and other dog owners would be walking their dogs in the park, see people working on the rink and decided that they too would help out.

When people move in to the community around Fairmount Park, it is sometimes suggested to them to visit the rink where they’ll meet their neighbours.

“The core work involves putting up the boards each mid-December and taking them down mid-March. We do a big call-out for this and usually get around 50 people with their cordless drills or just muscle to carry the boards from the shed and connect them. This takes about three to four hours to put them up and down,” said Elliott.

About 10 people will come out nightly to flood the rinks. It only takes two or three people to do the work. So it’s an opportunity to socialize for most of the volunteers, he said.

For tips to aspiring outdoor rink builders, Elliott said that some of the things that worked for him and the other Ice Masters was buying hockey rink boards, modifying a riding-lawnmower into a Zamboni, fundraising with companies they work for, and developing a significant group of dedicated volunteers.