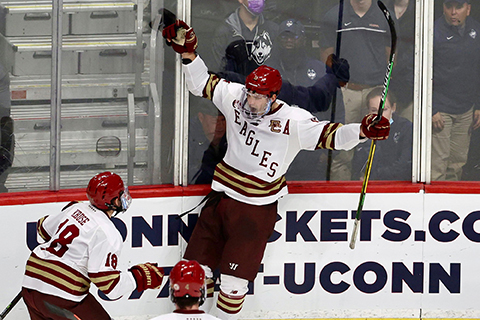 Beacher Jack McBain, a Malvern Collegiate Institute grad, has been named to the Canadian Men's Hockey Team that will be competing in the Beijing Winter Olympics in February. Photo by Boston College Athletics Department.

Beacher Jack McBain, 22, has been named to the Canadian Men’s Hockey Team that will be competing in next month’s Beijing Winter Olympics.

McBain, who is in his fourth season with the Boston College Eagles, was officially named to the 25-player Team Canada roster earlier this month.

Like 21 other players on this year’s version of Team Canada, these will be the first Olympics for McBain. Due to COVID-19 and other concerns, players who are on the rosters of NHL teams will not be taking part in the 2022 Winter Olympics.

The Canadian men’s team is presently in training in Davos, Switzerland in advance of the Winter Olympics.

Along with being in his first Olympics, McBain is also the first player from Boston College to be named to a Canadian Men’s Olympic Hockey Team.

McBain grew up in the Beach and attended Malvern Collegiate Institute through Grade 12.

He played minor hockey with the triple-A Don Mills Flyers and also in the Ontario Junior Hockey League with the Toronto Junior Canadiens before joining the Boston College Eagles in 2018.

McBain was drafted by the Minnesota Wild in the third round of the NHL Entry Draft but has not played any pro hockey yet. A left-hand shooting centre, McBain is six-feet, three-inches tall and weighs in at 201 pounds.

His game was described by the OJHL’s Pointstreak.com as “a smart player, a hard worker, and someone who brings out the best in those around him.”

Jack McBain is the son of Andrew McBain who played 608 games in the NHL after being drafted in the first round by the Winnipeg Jets in 1983. Andrew McBain played in the NHL with Winnipeg, Pittsburgh, Vancouver, and Ottawa.

Team Canada’s opening game at the Beijing Winter Olympics will be against Germany on Feb. 10. Canada will then play the United States on Feb. Feb. 11, and China on Feb. 13 to complete the preliminary round.

– With files from the Boston College Athletics Department and pointstreak.com