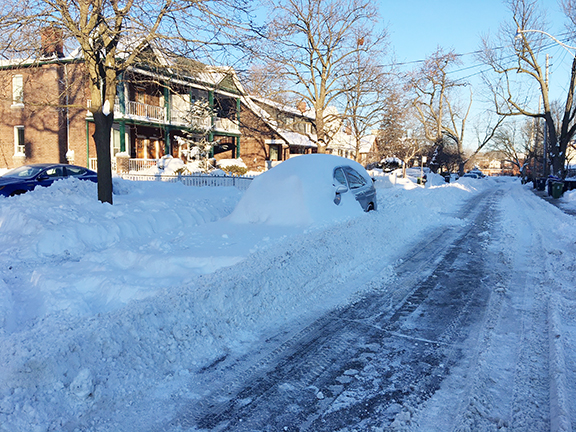 Parked cars covered in snow and blocked in by snowplow windrows area a common sight around Toronto this morning, including on this street near Gerrard Street East and Main Street. Photo by Alan Shackleton.

In order to help with the cleanup after Monday’s massive snowstorm, the City of Toronto has declared a “major snow storm condition” which will ban parking on snow routes throughout the city.

The declaration was issued on Jan. 17 and will be in effect for at least 72 hours.

“This will allow for the snow removal of windrows left by the City’s snow plows, which can restrict traffic flow, interfere with pedestrians and parking and obstruct sightlines,” said the city’s declaration.

“Under this declaration, the City will collect the snow and remove to designated snow storage sites. Snow removal operations will commence as soon as planned plowing operations conclude later this week.”

The snow route parking restrictions are primarily in the downtown core and along all streetcar routes. Parking in these areas could result in a $200 fine.

“Police, fire and ambulance services rely on clear roads to respond quickly to emergencies. The City’s Transportation Services division is responsible for moving vehicles that delay crews or hinder snow-clearing operations, even when a major snow storm condition has not been declared or when a vehicle is legally parked. In such instances, vehicles are usually towed to an adjacent street,” said the declaration. “Residents should call the Toronto Police Service at 416-808-2222 to locate a vehicle that has been towed from a major arterial roadway. Illegally parked vehicles may be tagged, towed and impounded.”

While the cleanup and removal of accumulated snow is taking place, the city is encouraging people to stay at home if possible.