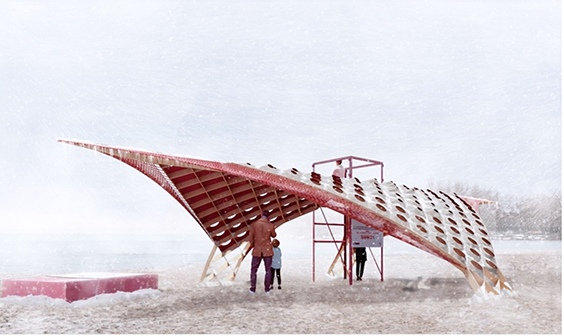 S'winter Station from Ryerson University is seen in image above. The finalists for the Winter Stations 2022 art installation on Woodbine Beach have been named.

The six art installations that will make up the Winter Stations 2022 exhibit along Woodbine Beach have been selected.

Winter Stations began in 2015 as a way to highlight the beauty of the Eastern Beaches and make them a destination point for outdoor art installations during the winter. The artworks are set up at the lifeguard stations along Woodbine Beach, and each year an international competition receives entries connected to that year’s Winter Stations’ theme.

In 2021, winners had been selected for the art installations but they were not put up over the winter on the beach due to COVID-19. However, some of them were later displayed along Queen Street East in the summer thanks to The Beach BIA.

Given all that the world has gone through over the past two years, the theme for Winter Stations 2022 was Resilience.

“Designers were asked to celebrate the ability of people to withstand and push through challenging and unprecedented times,” said the Winter Stations press release announcing the 2022 winners.

This year’s Winter Stations will take place along Woodbine Beach starting on the Family Day long weekend in February and continuing through until the end of March. That is, of course, “pending any unforeseen COVID restrictions”.

The founder of Winter Stations, Roland Rom Colthoff, said he was “overjoyed” that the art installations would be back on Woodbine Beach this year.

“It’s great to be able to offer Torontonians a distanced and safe event to look forward to this winter. Whether it’s your first time seeing the exhibits, or you’re returning for another year, we hope you enjoy the installations that artists and designers from around the world worked so hard to create,” he said in the press release.

With Resilience as the theme, this year’s Winter Stations also recognizes the impact of the pandemic on East Toronto and particularly shelter residents. One of the installations has been dedicated to the women and gender diverse individuals who lived at the YWCA’s temporary emergency shelter on Queen Street East in the Beach for most of last year and a good part of 2020.

“After reviewing the winning stations, residents and staff (at the YWCA emergency shelter) were drawn to THE HIVE, because of its vibrant colours and how it represents resilience and hope in building community in unprecedented times,” said the press release.

For 2022, Winter Stations will also be expanding its footprint beyond Toronto. The installation Wildlife-guard Chair will debut in early February at Hamilton’s Winterfest on Pier 8, before heading east to Woodbine Beach for Family Day.

Winter Stations was first launched by RAW Design, Ferris + Associates and Curio in 2015. Over the years it has become immensely popular with both local residents and visitors to the Beach.

Here is more information on the six winning installations for Winter Stations 2022: Inspired by the northern cardinal bird – a specie present all-year round in Ashbridge’s Bay Park – the station seeks to engage the visitors with Toronto’s wildlife. The diversity of species taking refuge in the dense urban environment is both remarkable to observe, and critical to preserve.

THE HIVE (Kathleen Dogantzis and Will Cuthbert, Canada) The forces of nature are relentless. Like the falling snow of the sky and the shifting sands of the beach, the pavilion embraces local wind, snow, and sun conditions. Following these directions of force, the pavilion’s wings embody movement by harnessing snow and mitigating strong winds. Beach towels have been formed into dynamic concrete panels with varying openings. These panels control the amount of light and snow allowed to enter, while also creating unique views outwards. Together, the panels and wings protect users and encourage them to engage with their surroundings. Where the lifeguard station, beach towels, and marine ropes are more frequently used in the summer, the pavilion achieves resilience by employing these objects in the winter. The pavilion acts as a shelter for the community where winter conditions are celebrated by harnessing and adapting to natural forces.