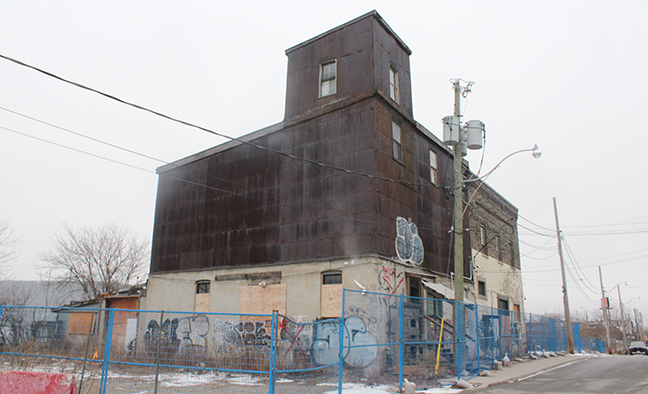 The lands and building at 10 and 10A Dawes Rd. are in the process of being designated under the Ontario Heritage Act. The building was a former grist and flour mill going back to the late 1800s. The area is also the site of some massive future development plans as seen in the inset image's yellow buildings, which includes Dawes Road south of Danforth Avenue at the left.

A building at the southern end of Dawes Road is in the process of being designated as a property of cultural heritage value or interest.

The City of Toronto announced in late December that it intends to designate the lands and building at 10 and 10A Dawes Rd., south of Danforth Avenue and north of the railroad tracks, under the Ontario Heritage Act.

The building on the west side of the road is a former grist and flour mill that was constructed in approximately 1895, said the city’s notice of intended designation.

“It was likely originally occupied by the East Toronto Milling Company…The Chalmers Milling Company owned and operated out of 10 and 10A Dawes Road from 1905 until the properties were sold to the Elizabeth Flour & Seed Milling Co. in 1952,” said the notice.

“The company continued to occupy the properties 10A and 10 Dawes Road for 29 years until they were sold and adaptively reused in 1981 and 2007 respectively.”

Most recently, the space at 10 Dawes Rd. was home to the Silver Mill Gallery which offered programs for Toronto’s emerging digital artists.

The buildings at 10 and 10A Dawes Rd. consist of a two-and-a-half storey brick building with a one-storey attached brick building at the rear that housed the steam mechanism operating the mill, and a three-storey building including the mill’s metal-clad grain elevator.

“The property at 10 Dawes Road is valued as a rare surviving example of the grain elevator building type in the historic village of Little York and the Town of East Toronto,” said the city’s notice.

“It is also valued as a rare surviving example of a grain elevator built in a wooden-crib form, a construction style that was replaced during the 1920s by concrete grain terminals and later, by steel. The three-storey box form structure was purpose-built to raise grain from a pit below the basement at its southeast corner and then elevate it through the building into nine storage silos where it could be kept before being milled in the neighbouring structure at 10A Dawes Road.”

The notice said the wheel and rubber conveyor belt housed in the mill’s headhouse still exists.

The lands and building are historically important and requires heritage designation because of their association with what were once the large railway lands directly to the south and the activity of milling, said the notice.

These activities were “significant in the development of the village of Little York during the late nineteenth and early-twentieth centuries. The opening of the Grand Trunk Railway’s (GTR) freight yard and roundhouse to the south of the subject properties and the relocation of York Station to Dawes Road, significantly contributed to the early wave of residential subdivision and industrialization of the area,” said the notice.

“Directly from the railway cars, grain would travel into the subject properties – first into 10A Dawes Road and later into 10 Dawes Road once it was constructed – where it could be stored until it was ready to be milled next door.”

The area of Dawes Road and Danforth Avenue was a hub of the community in the past centuries, and the mill played a role in the evolution of the area.

“The subject properties have value for their ability to yield information that contributes to our understanding of the development of various historic settlements near the GTR tracts at the corner of Danforth Avenue and Dawes Road from the mid-nineteenth to early-twentieth centuries,” said the notice.

“First the location at Dawes Corners in 1850, followed by Smith’s Corner in 1870, and Little York and Coleman’s Corner from the 1880s until the annexation of Little York to the Town of East Toronto in 1903, the corner was a popular location for the construction of local inns and stores for several decades.” Dawes Road south of the Danforth Avenue is also slated for a number of large development projects including multi-storey residential buildings on both sides of the street. For more on some of the proposals for the area, please see Beach Metro Community News’ earlier story at https://beachmetro.com/2020/01/22/main-street-planning-study-big-buildings-and-big-density-are-coming/

Anyone wishing to object to the proposed heritage designation of 10 and 10A Dawes Rd., must file their objection by Jan. 24.

A notice of objection to the Notice of Intention to Designate the Property can be served on the City Hall Clerk, Attention: Administrator, Secretariat, City Clerk’s Office, Toronto City Hall, 2nd Floor West, 100 Queen St. W., Toronto, ON, M5H 2N2. A notice of objection can also be sent by email to hertpb@toronto.ca

Objections must set out the reason(s) for the objection and relevant facts.

Have always enjoyed the wonderful stories on the History of the E ast Toronto Areas having been born at the East General General Hospital in 1949 love the Stories and PICTURES thank you all so much.