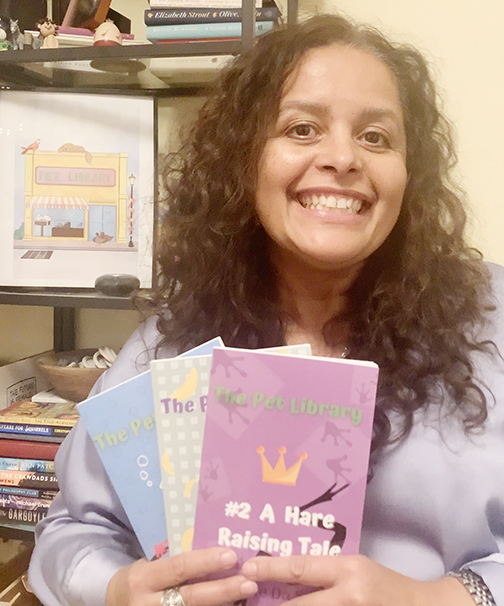 Beach writer Michelle Da Silva is the creator of The Pet Library fictional series of books.

The series includes Grand Opening, published in August of 2020, then A Hare Raising Tale and also Something Fishy. The stories document the dramatic adventures of the young Audrey Plum.

“I wanted to write about a little girl who desperately wanted a pet but whose parents didn’t like pets,” said Da Silva.

“When Audrey learns about the opening of the pet library, she is convinced that it’s the answer to her pet problems. She’s messy and goofy and adorable and I think that comes through in her enormous eyes and wide lopsided smile.”

Da Silva was inspired to write Grand Opening through her own desire to bring a dog or cat into her family.

“I thought how great it would be if we could borrow someone’s dog to see if it was the right choice for us.  Then, I remembered how a friend had told me years before about a place she’d read of in another country where you could borrow a pet to ‘try it out.’ That’s how I got my inspiration for the first story, Grand Opening,” she said.

Being in lock-down, I re-entered Audrey’s world, seeking escape from all the craziness that was going on outside my door, across the globe. Suddenly, as I re-wrote, I uncovered a greater humour and joy in the stories that I’m not sure was quite so evident in earlier drafts.”

Da Silva said that was an aspect of the stories that is appreciated by readers.

“I’ve had a couple letters from young readers who have told me they love the stories because they are funny and make them laugh,” she said.

Da Silva also wrote an article that appeared in CityParent magazine, talking about the inspiration for and process of writing the series. In November, the magazine did a pet photo contest on Instagram. The winner will have their pet photo in the January edition of CityParent as well as an autographed set of The Pet Library books.

“Wild Thing is going to be the fourth book in the series.  It is planned for publication in April 2022,” said Da Silva.

“I don’t want to give away too much, but Wild Thing features two very atypical enemies that we’ve been reading about in storybooks and seeing on television for decades, a cat and a mouse.”

The Pet Library series is available at https://www.chapters.indigo.ca/en-ca/ and https://www.amazon.ca/