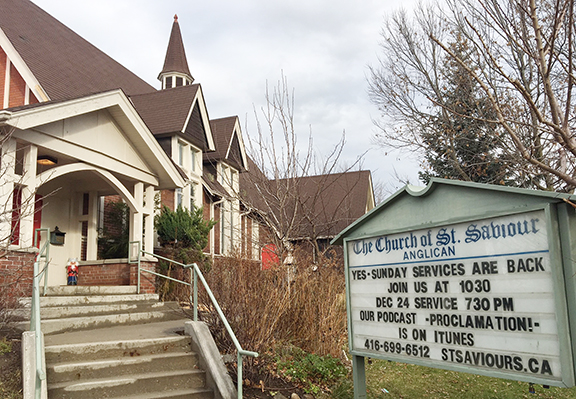 St. Saviour's Anglican Church has been serving the East Toronto community since 1891.

Ingrid and Jessie were walking past St. Saviour’s Anglican Church on Kimberley Avenue one September afternoon 15 years ago when she spotted Rev. Shelley McVea presiding over the parish’s annual pet blessing on St. Francis of Assisi Day, which commemorates the patron saint of pets. They stopped by for a blessing and a chat.

When Ingrid and her late brother-in-law Michael Fridella, who had an intellectual disability, decided to drop into a Sunday service several weeks later, they were struck by how welcoming the church was compared to others they had attended. Ingrid was moved to return the hospitality and invited Rev. McVea to dinner.

“I wanted her to meet my spouse, Michael’s sister Rita, and I wanted to make sure that both Michael, with his disability, and me, as an out lesbian, would be accepted by this congregation,” she remembered.

“She assured us that we would be accepted,” added Ingrid, who has served as the church’s treasurer for several years. “This is a promise that has truly been kept – not just by Shelley, but by every single member of the congregation.”

That strong sense of community and a striving to reflect God’s love in the neighbourhood has sustained St. Saviour’s since 1891, when the church near Main and Gerrard was dedicated by then Bishop of Toronto Arthur Sweatman.

Celebrations to mark the 130th anniversary this year have been dampened by the COVID-19 pandemic, but St. Saviour’s is about to release a special commemorative booklet about the church’s long history.

“This 130th anniversary commemorative book is a brief sketch of historical notes taken from vestry minutes from 1888 to 2021, scrapbooks, photo albums, the Book of Remembrance under glass in the Narthex, and special memories shared by members and friends of the church,” said Dale Hawke, a member of the church’s leadership team.

“Additional photos, as well as a detailed account of the first 100 years of history, which formed part of the 100th anniversary booklet, can be found on the St. Saviour’s Facebook page and on the church’s website, (http://www.stsaviours.ca/home)” she added.

Built on land donated by Mary Swanwick Morton, the wife of Bank of Upper Canada executive Benjamin Morton, the church’s congregation was originally made up of many railway workers and their families, who lived and worked at the first train station east of Toronto’s Union Station. The land is the traditional territory of the Wendat, Anishinabek Nation, the Haudenosaunee Confederacy, the Mississaugas of Scugog, Hiawatha, and Alderville First Nations and the Métis Nation.

In the area now encompassing Danforth GO Station, 300 to 400 workers were employed until the early 1900s at one of the Grand Trunk Railway’s largest freight facilities, which included marshalling yards, coal storage containers and a roundhouse.

St. Saviour’s sat amid a cluster of historic buildings that formed the centre of a busy community, including Community Centre 55 (originally a police station), the fire hall, Kimberley Avenue Public School and the Main Street Branch of the Toronto Public Library. At its peak, the bustling Village of East Toronto boasted about 5,000 residents.

According to an account by local historian Gene Domagala, the freight yard was closed in 1908 and reallocated to Grand Trunk Railway facilities in Etobicoke and Belleville – in large part because the steep grade from downtown Toronto to the Village of East Toronto required three locomotives for the shuttling of freight. That incline and the resulting closure brought about an economic decline for the Village of East Toronto.

It was the first of several challenges to St. Saviour’s survival that the congregation has overcome during the church’s 130-year history.

“Our story has always been about reaching out to our neighbourhood with the love and compassion of Jesus,” said Rev. McVea, a lifelong resident of East Toronto who has served as priest-in-charge at St. Saviour’s for more than a decade.

“The original church building was erected to serve the many railway workers living in the area in the late 19th century,” she added. “Today, we reach out to our neighbours with regular worship services and also with our monthly, grocery gift-card program, a blessings box, and hot chocolate and muffins for the Beaches Santa Claus parade in November.”

In 1981, the church became the Monday-to-Friday home of the non-profit East Toronto Village Children’s Centre. And in 2018, St. Saviour’s offered space to its new sister church, the Medhanialem Ethiopian Evangelical Church, which conducts worship services there on Sunday afternoons.

Many parishioners have found a spiritual home at St. Saviour’s as newcomers to Toronto or after a time of wandering.

Elsie Molyneaux, a longtime member who originally hails from Prince Edward Island, discovered the church soon after she and her husband moved to the east end in 1975. In 2007, she moved into her son’s home in Etobicoke, but continued to make the long commute to St. Saviour’s every Sunday morning until the pandemic. “I love everybody,” she said. “We are all like family.”

That strong sense of community also appealed to Avianne Birkett after she moved to the city five years ago.  “I knew that St. Saviour’s was the place for me when I received such a warm welcome,” she recalled. “I even connected with other persons from my home country, one of them being a family friend with whom we had lost touch.

“Whenever I attend church,” she added, “I experience such a wonderful sense of peace and receive warmth and kindness from the other members. St. Saviour’s has been a bastion of strength and a place of refuge for me over the years, for which I am deeply grateful.”

Aaron Pootash found St. Saviour’s 11 years ago during a difficult time in his life, when he needed the additional help provided by the church’s grocery gift-card initiative, which it calls the Bread of Life program.

“I started coming and then I just fell in love with everybody here and kept coming,” said Aaron, whose Ojibwe identity adds to the church’s diverse mosaic.

Petra Asfaw, who serves as St. Saviour’s people’s warden, said the church is always looking for ways to invite others in and to continue to do God’s work in the community as times change.

In recent months, those efforts have included establishing an anti-systemic racism group to raise awareness and take action against racism. The church has also erected a “Blessings Box” outside the building.  The free food pantry contains non-perishable food, and St. Saviour’s encourages people to take what they need and leave what they can.

“We’re always open for others to join us, in any way they feel comfortable,” said Petra. “And if you have any ideas or suggestions for what you think is needed in our community that we might be able to help with, please let us know.

“We’re a church,” she added, “but we’re a part of your neighbourhood. And like all good neighbours, we’re always trying to be better ones.”

To learn more about St. Saviour’s, check out http://www.stsaviours.ca/home or https://www.facebook.com/churchwithreddoor/