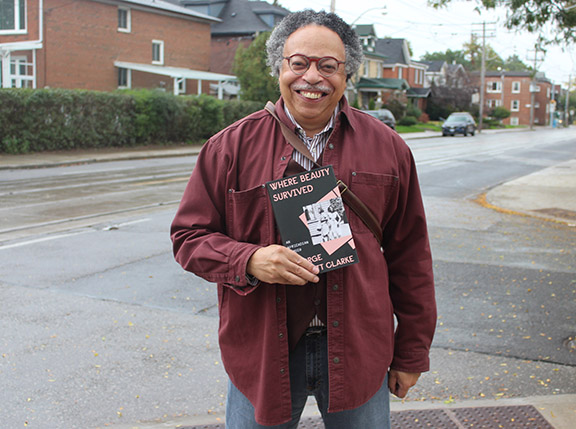 East Toronto poet and author George Elliot Clarke presents an online event celebrating poetry and music, including the debut of a transition of the late Leonard Cohen’s poem For E.J.P. into a song, on Dec. 10.

Clarke, who was Toronto’s Poet Laureate from 2012 to 2015 and the National Poet Laureate of Canada from 2016 to 2017, lives in the Upper Beaches. He also recently released his book Where Beauty Survived: An Africadian Memoir. ( https://beachmetro.com/2021/10/29/george-elliott-clarkes-book-where-beauty-survived-an-africadian-memoir-examines-his-early-life-growing-up-in-halifax/ )

The Friday, Dec. 10, event is called 5 Poets Breaking Into Song: #3 and will take place on Zoom starting at 7 p.m.

“Excitingly, Mr. Rolfe has now composed music for Leonard Cohen’s 1964 poem, For E.J.P., which I have loved for several decades,” said Clarke.

The E.J.P. in the poem’s title refers to Edwin John Pratt, considered by many to be English Canada’s greatest poet of the early and mid-20th century.

The estate of Cohen, who died in 2016, has given permission for the new song to debut as part of 5 Poets Breaking Into Song: #3, said Clarke.

The featured compositions will also include poems by Amatoritsero Ede, Luciano Iacobelli, Paul Zemokhol, and Clarke. They will be sung by Rolfe, with piano accompaniment by Juliet Palmer.

Hosts for the evening will be Giovanna Riccio and Jovial Si.

As its title implies, this is third online presentation of 5 Poets by Clarke.

“All presented in association with the phenomenally multiculturally-oriented East and West Learning Connections,” said Clarke. “We hope that you will register and tune in.”