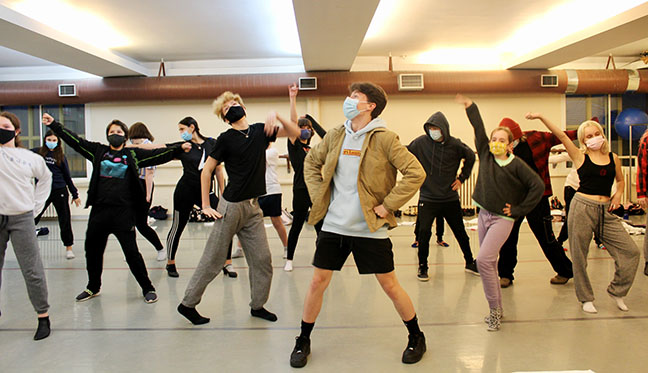 Members of the Mainstage Theatre Company rehearse for The SpongeBob Musicial recently. The show is on at the Papermill Theatre in Todmorden Mills from Dec. 8 to 12. Photo: Submitted.

What do you get when you take a group of talented Toronto youth and take them on a journey to the bottom of the sea?  To quote SpongeBob Squarepants, the big yellow animated sponge that we all know and love, you get the “best day ever”.

After two years of being kept from dancing and singing live on stages because of COVID-19, a noted Toronto youth musical theatre group returns to live production at the Papermill Theatre in Todmorden Mills on Dec 8 with a production of a Broadway hit, The SpongeBob Musical, by Kyle Jarrow.

The SpongeBob Musical launched in 2016 to critical acclaim.  It garnered 12 Tony Award nominations in 2018.  The musical is based on the celebrated Nickelodeon animated series with beloved characters such as SpongeBob, Patrick, Squidward, and many more.  It features music by David Bowie, Cyndi Lauper, Lady A, Aerosmith, John Legend and many other popular musical stars.

The choice of SpongeBob as the musical show to bring kids back to live performances was quite deliberate according to the outgoing Artistic Director of Mainstage (now Executive Director of the Ottawa Fringe Festival) Alain Richer.

“SpongeBob is an ambitious production – it is very challenging musically.  It is also lots of fun and has an optimistic message about the world, something that kids, and their parents frankly, really need right now. “

COVID-19 has been incredibly hard on the mental health of kids and teens according to health experts.  The cessation of extra circular activities has contributed to the social isolation kids have been feeling, cut off from important social, physical and emotional outlets.

This is a sentiment echoed by Grade 12 Malvern Collegiate Institute student and cast member Georgia Helverson, who plays Pearl Krabs.

“The isolation of COVID has been hard.  It has been hard to even feel creative at all with all worry and all the limitations around being together,” she said.

Ania Rudzik, a Grade 12 student who plays Karen the Computer, said musical theatre has been instrumental in her life.

“I’ve been with Mainstage since I was 11-years-old and it has shaped me so much into the person I am today.  Mainstage gave me opportunities along with the support to really develop my skills and my confidence.”

Returning to live musical theatre has been complicated for the small organization, especially as the cohort of youth is from 11 years-old to 21 years-old which has meant accommodating kids just now becoming eligible for vaccinations.

Digital rehearsals, masked and distanced rehearsals, and daily COVID-testing during the run of the show has allowed this production to move forward with its really gifted young cast, many from the East Toronto area.

Mainstage Theatre Company is a non-profit arts education group that is known for the quality of its productions where talented youth get the opportunity to work with professional artistic teams – directors, musicians and choreographers – on productions that are staged for live audiences.

The production of SpongeBob The Musical by Mainstage Theatre Company takes place at the Papermill Theatre, 67 Pottery Rd., Dec 8 to 12.  For more details and ticket purchases please go to http://www.mainstagetheatre.com

Proof of vaccination is required to attend the performances.