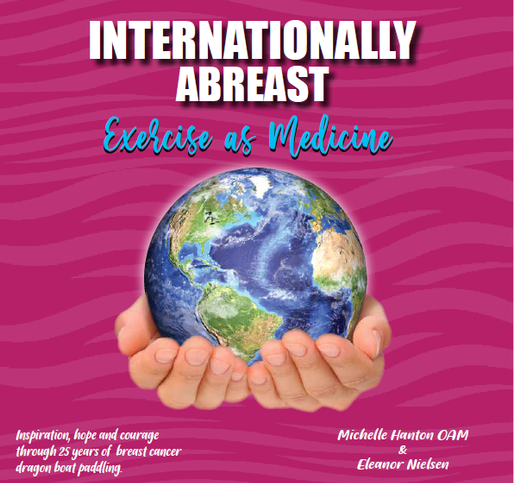 Twenty-five years ago the idea that physical activity, especially those involving the upper body, could lead to lymphedema in those diagnosed with breast cancer was disproved. Since then, the sport of dragon boat paddling has grown in popularity among breast cancer survivors around the world.

Dragon boat paddling is a sport that originated in China and involves two rows of 10 people paddling as well as a drummer and the steerer.

Nielsen and Hanton took it upon themselves to preserve the history of the relationship between dragon boat paddling and breast cancer survivors.

“We noticed history is being lost and decided to record the story while we have access to those there from the beginning,” Nielsen said. “[Such as] the Abreast In A Boat Originals and founders in most countries where the movement has spread.”

Not only is the book an effort to record their history, it is meant to be a source of inspiration and information for anyone affected by breast cancer.

“Around 5,000 women and some men living with breast cancer have enjoyed the benefits of dragon boat paddling,” Nielsen said.

None of this would be possible without the breakthrough research by one doctor who thought that physical activity could help with breast cancer recovery.

“All of this is thanks to one research study by Dr. Don McKenzie and 24 Vancouver women,” Nielsen said.

“They were courageous enough to participate in a study in 1996. Dr. McKenzie’s research changed what women were advised to do to avoid lymphedema following breast cancer surgery and treatment. It was the beginning of the knowledge that physical activity and exercise should be part of all cancer treatments.”

It isn’t just the physical activity that draws people to dragon boat paddling. The relationships the participants build and the friendships they make are just as important according to Shelley McCaughtry, a teammate of Eleanor’s at Dragons Abreast.

“It’s been a big part of my fitness,” McCaughtry said. “But it’s also the friendships that we make and the support that we have for each other.”

Every member of Dragons Abreast Toronto is a breast cancer survivor and knowing that they are going through similar struggles and can relate to each other without explicitly stating it is what Nieslen refers to as their “silent” support group.

According to Dianne Boehm, who recently joined Dragons Abreast Toronto, a breast cancer diagnosis can overwhelm family members and the team can sometimes be a better outlet for her.

While the exercise is great, it’s the feeling of being part of a community, and the strength and comfort it provides, that appeals to Boehm.

“Being part of the community and finding your own strength and knowing that you can get stronger emotionally, physically, and make those connections is as much a part of it as anything.”

Fresh off the launch for Internationally Abreast – Exercise as Medicine on Oct. 25, Nielsen and Hanton hope that their book can provide that feeling of support and inspiration to empower those fighting against breast cancer.

“Once you are diagnosed, medical treatment – chemotherapy, radiation therapy etc… dictates our day and many people feel they lose control,” said Nielsen. “Choosing to start dragon boat paddling is a personal choice with unexpected rewards. For many women, this is the first time they have put their priorities first, and the physical challenges pay many dividends.”

The goal of not only the book but Dragons Abreast as a whole is to inspire hope according to McCaughtry. They want to be “walking, visible” positive examples of what life after breast cancer can look like.

“It looks like these amazing, somewhat athletic [women],” said McCaughtry. “[We’re] having a great time, paddling our asses off in races, faster than we’ve gone for decades!”

“We don’t sprint anywhere now that we’re this age, but put us out at the starting line of a race and let me tell you, we’re going hard.”

Internationally Abreast – Exercise as Medicine, which will soon be available to purchase online and in your local bookstore, highlights the international appeal of dragon boat paddling.

“[It is] a global snapshot that includes a piece about each country with a breast cancer dragon boat team,” said Nielsen. “The focus is on how they started. There are also some wonderful poems, anecdotes, and stand-alone quotes from paddlers, coaches, and supporters worldwide.”

The story of dragon boat paddling, and the women of Dragons Abreast, is one of hope, inspiration, and perseverance. It is an idea they embody and that is captured perfectly by Swedish dragon boat paddler Isabella Scandurra.

That is why I am a ‘never giving it up’ dragon boater,” said Scandurra. “I will paddle for life as long as I can. And then I will be either a drummer or a steer person! And when it is no longer possible to be in the boat, due to lack of treatments, increasing mets or other bad and sad things, I will cheer on the teams from the shore.”