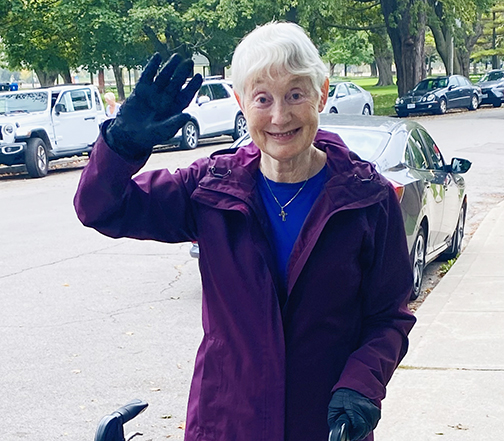 Maureen Grange lived in the Beach since 1976 and loved to walk in the area and meet with friends. Photo; Submitted.

Last month, the Beach neighbourhood lost one of its dearest residents. Maureen Renna Grange died peacefully on Oct. 15 surrounded by the people she loved.

Many may recognize her from her long strolls around the neighbourhood, where she enjoyed chatting with people and visiting the businesses along Queen Street East.

Maureen and her husband Anthony came to Canada from England in 1971, and after living in Deep River and the Bruce Peninsula finally settled on Kenilworth Avenue in 1976.

They raised two daughters, Kristanne and Jillian, in the Beach.

Shortly after becoming a mother herself, Maureen joined an active group of women in Toronto who were working as lay midwives. Over the next few years, she assisted the home-births of more than 100 babies.

This group also advocated vigorously for new regulations to recognize midwifery as a professional designation, and victory came in the early 1990s when the Ontario government enacted legislation to regulate midwives as health professionals.

Maureen was a long standing parishioner of St. John’s The Baptist Norway.

In 1995, she was involved in forming the East End Refugee committee (EERC) with other members of the church and other faith communities. This committee still participates in Canada’s Private Sponsorship of Refugees Program, which helps to sponsor and resettle refugee families from around the world.

Maureen’s kind and compassionate nature helped many families settle into new lives in Canada, and she greatly valued the life-long friendships formed.

Maureen always loved meeting new people and was happiest in a crowd getting to know others. She had a passion for helping anyone in need, and had a wonderful ability to make people feel loved.

She especially enjoyed her daily walks throughout her beloved Beach neighbourhood and chats with her many special friends. She always took the time to listen to others, and to express her love for them.

Maureen will be lovingly remembered for her keen sense of humour, her love of music, and for always being ahead of her time. She will be greatly missed by her family and by the community that meant so much to her.

Maureen’s family wishes to thank the Beach community for their love and support, and for the exceptional kindness bestowed upon her during her Beach walks. She loved you all.

— Written by Jillian and Kristanne Grange

I am so sorry for the loss of Maureen. I met Maureen on the street just a couple of months ago. I passed her on Kippendavie. We were just strangers passing each other. When we passed, we engaged and Maureen’s face just lit up. I will never forget the look on Maureen’s face and how it changed when we engaged with each other. Maureen will forever remind me that engaging with strangers is important. That importance of being kind and patient with those we don’t know is crucial for our society to heal. Thank you for that lesson, Maureen. You will be missed on the streets of the Beaches.

I didn’t know your mother personally, but immediately recognised her picture. I have seen her around the neighbourhood frequently and it seemed as though she knew everyone! She chatted kindly with the staff at Starbucks and would say hello to me as I walked my dog in the park. It has been so wonderful to read about the life that she led – what an amazing woman!

I hope you can all find some solace in knowing how well-loved she was by her neighbours and that she certainly made our days a little brighter. My mother’s name is also Maureen and I myself work at the Children’s Aid Society so it was nice to read those connections.

Sending your families warmth and comfort.