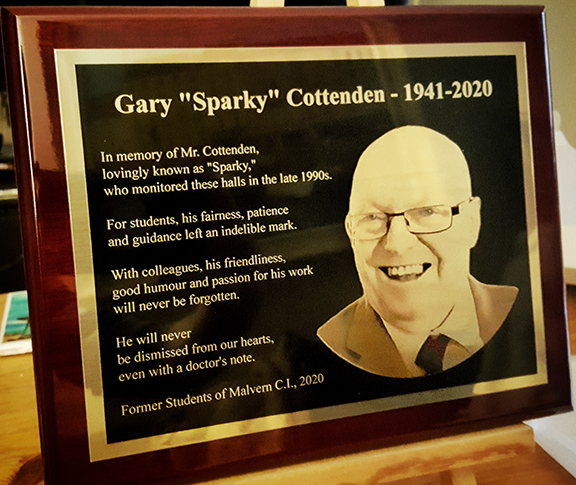 A memorial for Gary ‘Sparky’ Cottenden will be held at Malvern Collegiate Institute on Monday, Nov. 15.

Cottenden was a volunteer hall monitor at Malvern Collegiate and Birchmount Park Collegiate Institute who passed away in April 2020 after a long battle with Alzheimer’s disease.

Malvern alum Tyler Thomas, who attended the school from 1996 to 2000, said that Cottenden made an impact on students of his generation.

“The thing that stuck out with us is that he was particularly fair and always very kind. In certain situations where he could have done many more things in terms of giving us detention or much, much worse in some cases, he would level with us,” said Thomas.

“I sent out a little notice to people that I went to Malvern with and was completely overwhelmed by people I didn’t even know that ran into him in terms of him giving them seconds chances, and making sure they were where they were supposed to be,” he said.

Thomas said that after receiving dozens of messages from Malvern alum, he wanted to memorialize Cottenden and his acts of kindness.

The plaque will be raised in the hall near the parking lot where Thomas said Cottenden would frequent.

“There were dozens of people smoking in the back parking lot, so between each class, he’d make a little sweep to make sure everyone got to where they were supposed to be,” he said.

“He’d have good chat with you…He was very level-headed and friendly and stood out a lot.”

The memorial will take place on the school grounds at 3:15 p.m., and all are welcome to come and pay their respects to Cottenden.