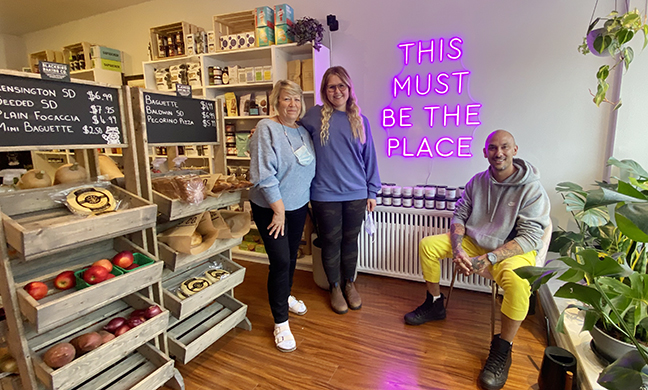 The COVID-19 pandemic caused a boom of entrepreneurships, from small batch salsas to tech start-ups, as Canadian entrepreneurs invested in themselves and created new opportunities in the face of adversity.

When Birch Cliff resident Daniel Naraine started handcrafting soy wax candles in his basement he joined the club of Canadian pandemic business owners, but then he decided to take his entrepreneurial spirit a step further. A big step.

Throughout the pandemic, Daniel and his wife Liana had found themselves becoming more and more frustrated by the lack of access to fresh and quality foods in their community, and decided to take charge on creating a unique shopping experience for their neighbours.

“We’d been living in the area for three years and constantly saying that we needed somewhere we could just walk to for essentials, or fun snacks, coffee,” said Liana.

“We were patiently waiting for all the condos to come up and hoping that they would have retail space but none of them do.”

Fate intervened when a quaint storefront on the Naraine’s street became available, and they jumped at the opportunity to fulfill their dream of owning and operating a local curated bodega.

Before August, some would easily have called the Birch Cliff neighbourhood a ‘food desert’, with few to no grocery stores within walking distance for most residents. But that’s changed since the Naraine’s opened City Cottage Market, just west of Warden Avenue and Kingston Road.

The shelves at City Cottage Market are stocked with fresh produce, breads, meal kits, snacks, and other essential items all sourced from local vendors and other small business owners. And of course, you can also purchase one of the beautifully scented candles that started this journey for the Naraine family.

The Naraine’s prioritize quality and sustainability when sourcing products for their store. City Cottage Market is partnered with 100KM Foods, a local food distributor that directly links vendors to local farmers.

“Over the pandemic, people’s priorities have really shifted in terms of what they buy,” said Liana. “People decided that they wanted to really support local. And that was a big driver for us because we felt the same way.”

Since opening in August, City Cottage Market has quickly made its mark as a welcoming spot for neighbours to grab a latte, pick up fresh bread or produce, restock on pantry items, and chat with whoever’s behind the counter.

Often, that person is Elaine, Daniel’s mother. She started working the shop shortly after opening, and though a bit nervous to get behind the counter at first, she’s become a sought-after face for City Cottage Market shoppers.

“I just love talking to people, hearing their stories,” said Elaine. “Sometimes people just come to buy one thing and end up staying for an hour to chat.”

The Naraine’s are confident in the store’s success based on the changing demographic and streetscape of the neighbourhood. With more and more condos being developed along Kingston Road, more young people and young families are moving east.

“Come in with toothpaste on your face, wearing your pyjamas, bring your kids and we’ll help bring the stroller up, bring your dogs,” said Daniel. “We really try to make it as convenient as possible. We really wanted to make the store feel like you’re just going to someone’s house.”

Both in their mid-thirties, Liana and Daniel came from corporate backgrounds prior to opening City Cottage Market.

Liana is still working her full-time job, managing underwriters at a large insurance company, but Daniel recently quit his job in software sales to fully dedicate himself to their business.