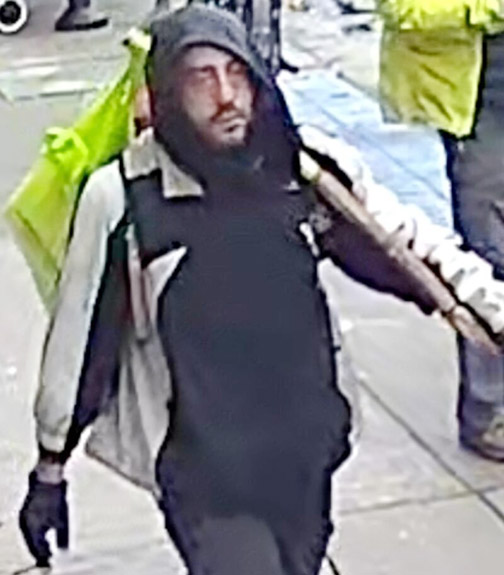 Police are looking to identify this man in connection with an investigation into alleged tampering to a pet water bowl placed outside a Queen Street East business on Oct. 30.

Toronto police are asking for the public’s help in identifying a man who allegedly sprayed an unknown substance into a bowl of water set up for dogs outside a Queen Street East business.

According to police, a man was seen in the area of Queen Street East and Boulton Avenue, a few blocks east of Broadview Avenue, approaching a water bowl for pets that was on the sidewalk on Saturday, Oct. 30, at about 12:30 p.m. The man was observed spraying an unknown substance into the bowl, police alleged.

The owner of the business that had put out the water bowl was made aware of the incident and removed it before any dogs or other animals could take a drink.

The man is described as five-feet, 10-inches tall, with a medium build, and has dark facial hair, with a possible goatee. He was wearing a black and white jacket, black hooded sweater, black pants, black gloves, and grey shoes with white soles. He was carrying a large wooden stick, bright lime green shopping bag and a red and pink backpack.

Investigators are warning the public to be aware of this man’s actions and use caution when allowing your pet to drink water that is in public spaces.

UPDATE: Police announced on the morning of Nov. 4 that a 41-year-old man has been identified and charged with mischief to property in connection with this incident.