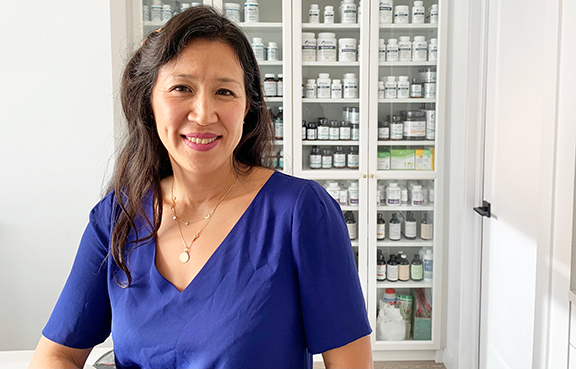 Dr. Mary Choi grew up and went to school in the Beach and now owns and operates Soma and Soul Wellness on Kingston Road. Photo by Mimi Liliefeldt.

Everyone has their own definition of success. For many it’s financial security, for some it’s creative fulfillment, and for others it’s a culmination of factors.

For Dr. Mary Choi, a well-known Doctor of Naturopathic Medicine, a symbol of success is a fancy chair.

Dr. Mary is a busy mother of four, and in her fourth year of owning and operating Soma and Soul Wellness, a holistic integrative health clinic on Kingston Road just east of Victoria Park Avenue.

Mary grew up and went to school here in the Beach. Her parents immigrated from Korea in the 1970s and owned Beach Food Mart on Queen Street East for many decades.

“Nobody probably remembers the name of the store, but everyone referred to it as Suzie and Charlie’s,” Mary informed me.

Like many immigrants, Mary’s parents worked constantly to lay the foundation for generational success.

“My parents worked every single day of the year. They never closed. Christmas Day, we were at the store. I can tell you (only) a handful of holidays,” Mary told me as she described her parent’s work ethic.

When you start life in a new country, you don’t have much of a safety net. People are much less likely to be able to or feel comfortable taking time off. Even if they have family here, they are likely in similar circumstances.

Mary talked about starting to see more Asians and non-whites in high positions and said, “I think it’s work ethic, this is the difference.”

She referenced a quote she heard from the CEO of Peleton, “there’s an element of hunger (among immigrants).” Work ethic plays a strong role in success, especially when you don’t have nepotism to rely on.

Shortly after arriving in Canada, Mary’s mom met a local woman who would become an important friend and family member.

Mary Littlewood, a Canadian missionary whom Mary herself is named after helped Sue acclimate to Canadian culture.

“She took my mom in. She taught my mom English, how to eat with a knife and fork, and taught her the Canadian way. Mary Littlewood became an adopted grandmother to us,” Mary told me, providing a beautiful example of how society can be more successful when we help each other regardless of our differences.

Differences are what make us interesting and when we explore them openheartedly, they can be the foundation to a greater understanding of our humanity. But being different, especially as a kid is hard. Mary expanded on this idea with examples from her childhood.

“My mom would bring strawberries and flowers and things to the teachers. Koreans love to give gifts and food, serve other people and that’s what she did. None of my other friends’ parents were doing this kind of thing. I was mortified. When there was kimchi at our house, my friends were very vocal, saying ‘it was gross, it smelled like feet!’ You’re a teenager, your M.O. (modius operandi) is to be accepted and to not stand out.”

Standing out when you’re young quickly teaches you how to blend in.

“The interesting part about growing up in white communities is that you learn how to integrate. I grew up Asian so I know things can be a bit curt or straightforward, but you learn the mannerisms of the white world,” Mary said.

This ability to integrate was an important survival skill for us POC as we navigated our youth. In fact, it is only now that the conversations and perceptions have opened up that many of us are feeling more empowered to embrace our differences.

There’s a self-consciousness that surfaces when you are singled out. And there are times that being singled out can be dangerous, humiliating, or uncomfortable; and so, we learn to adapt to protect our ability to feel safe and secure.

Even racism itself is a manifestation (albeit irrational) of people fearing their loss of safety or security.

Mary explained it this way:

“Everybody sees things through their own lens and consumed with their own stuff, that we don’t always go into a conversation open and reflective on the other individual. Which is unfortunate but I think what’s at the base of all this is that we all have the same basic human needs, and when your needs feel threatened you see a lot of these things (cyber-bullying, racism, unkindness). That’s what it all comes down to, ‘am I safe?’”

Mary herself chooses not to live in fear.

“My nature is that I’m not so sensitive. I’m open to people and where they come from. I understand not everyone has the same education or experience” but she does believe in more open dialogue to help us get a better understanding of each other.

The generosity of Mary’s spirit strikes me. The whole time we chatted I wondered where her sense of uneasiness or injustice was around these topics and then suddenly, she said something that made me understand.

“It’s not that I’m so passive in this space, it’s that I’m so focused on helping people to be more well, that’s more my perspective. I think if we could be more in the space of how can we accept everyone and celebrate our differences, I think that would be extraordinary.”

Everything about Mary fell into place with that statement. I understood that at her core, she is a healer. This is what makes all her hard work amount to something truly successful. Even when the stakes are high, she is willing to look at issues holistically and from all aspects, not just her own.

Mary’s drive for success was exemplified by a story she relayed to me.

“My parents never bought us gifts, they didn’t have the money for it, but one year my mother gave us (my sister and I) these chairs. They were small porcelain figurines; they were hand painted and very regal looking chairs. And she said, ‘One day, my dream is that you guys will sit in these chairs. That’s why I work for you, to have this in your future.’ It made such an impression on me.”

What Mary’s story illuminated for me is that success really is built on hard work, but without the strength of kindness, cooperation, and love, we will never be able to sit in our own fancy chair.