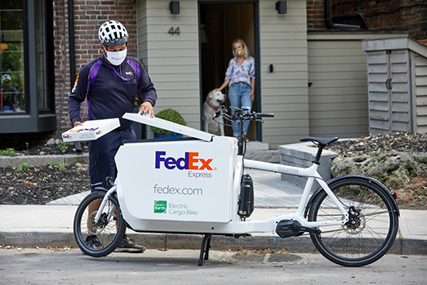 This image provided by FedEx Express Canada shows a package being delivered by an e-bike courier. Residents in the Beach, Leslieville and along the Danforth may have been noticing more of these bikes being used for courier deliveries over the past few months.

Torontonians have been receiving FedEx packages delivered by e-bike couriers for the past year, as many local residents may have been noticing.

The pilot project was launched by FedEx Express Canada to reduce carbon emissions from deliveries with more Canadians’ than ever before making online purchases during the COVID-19 pandemic.

When the initiative first launched in Toronto it started with only three bikes. After a successful pilot over the summer of last year, the program now has more than 40 bikes running in five targetted neighbourhoods.

Communities such as the Beaches, Leslieville and the Danforth were identified as target neighbourhoods for the project based on density and congestion issues.

The bikes allow for couriers to get around the city more easily, avoid traffic, and remove the worries of having to park far away or in less-than-ideal stopping situations.

“It’s definitely easier to get around the city,” said Jeff Gilbert, the senior operations manager of FedEx Express Canada.
“Using the bike lanes allows (couriers) to avoid a lot of the traffic congestion, and (they) don’t have to worry about city parking.”

The e-bikes being used by couriers are “pedelec” bikes, a type of electric bike where pedalling is assisted by a small electric motor. So, in neighbourhoods such as the Beach, which are full of steep hills, the couriers don’t have to dread the uphill terrain but can have some fun instead.

With winter approaching and snow and ice being an unavoidable fact of the season, the bikes are equipped with snow-tires and will continue being used providing the presence of safe weather conditions. Couriers are outfitted with winter gear to stay dry and warm on their ride.

Since launching last year, the project has been welcomed by Torontonians. According to Gilbert, FedEx couriers are often stopped for photos and conversation as they ride their delivery routes.

“The project has been very well received and it’s our goal to get as many bikes out there as possible,” Gilbert said.

After such success in Toronto, the program is now expanding to more Canadian cities with new pilots being put in place until Spring 2022. If the pilots are successful, the program will expand within those cities, as it did in Toronto.

FedEx has invested more than $2 billion towards its’ goal of obtaining carbon neutrality by 2040. According to Gilbert, FedEx is focussing on three things as the company works to make this goal a reality: vehicle electrification, natural carbon sequestration and sustainable energy.

In addition to the entire FedEx parcel pickup/delivery fleet is set to be zero-emissions vehicles by 2040, the company will also strive to continue its efforts of reducing fuel consumption used by its’ aircrafts.

For information on becoming a bike courier, go to the FedEx Express Canada’s job postings website at https://careers.fedex.com/expresscanada