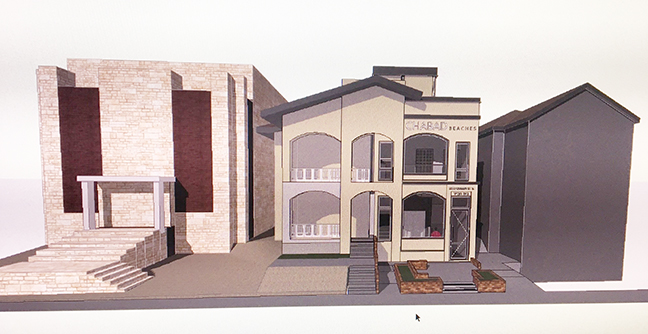 This revised plan for 2273-2275 Queen Street East shows a lower alteration to the front and preservation of the building's unique arches. Inset photo shows the building as it now looks.

A decision on plans to alter the duplex building at 2273-2275 Queen St. E. in the Beach was deferred following a Toronto-East York Committee of Adjustment (CoA) hearing last week.

Adam Ezer, a lawyer appearing as agent for owner and applicant Rabbi Sholom Lezell, said the main reason for the deferral was that Lezell was only advised on Sept. 21 about the need to comply with the Queen Street East Urban Design Guidelines.

“We need to revise our drawings…the city has agreed to defer. Basically, the status that we’re at is that the main concern of the adjacent property owner (Ed Wilson) and community members is to maintain the facade of the building facing Queen Street,” said Ezer in the virtual hearing of CoA on Oct.6.

Ezer told the committee that adjacent owner Ed Wilson would not consent to the design that would require work on his property, and that to comply with Urban Design Guidelines they would need one month for another hearing.

“We’re only taking away from what we’re asking, we’re not adding anything extra. The building is going to be lower at this point,” said Ezer.

Speakers Karen Cleveland, Paul Nagy, Brian Graff, and Wilson all said they would accept the deferral, and it was subsequently unanimously approved by the CoA.

In a previous article, Beach Metro News covered the original plans for the duplex that included a two-storey addition with a roof deck, and a four-storey addition at the front and rear of the building. These plans resulted in letters of objection to the CoA as some community members voiced their displeasure.

When reached for comment after the meeting, Wilson said that he had expected that the plans would be deferred.

“Toward the end of September, I knew it was coming. The Planning Department had taken a second look at the proposal and basically said it didn’t qualify and that they weren’t going to support it. At which point my neighbour decided to redesign rather than be defeated and start from scratch,” said Wilson.

Wilson said there were numerous letters of objection to the alteration of the building, so there’s some support in the community to have not let the original plans for it to go through. “The best thing would be if nothing happens. I’ve been here 41 years and just want to live out the rest of my life in peace and quiet,” he said.

Wilson said that he’s seen a lot of development happen on Queen Street East over the years that he’s come to expect.

Wilson also sent out a note to those that wrote objection letters to the CoA.

He wrote, “It is my belief that the many letters of Objection sent in to the Committee and the Planning Dept. by the community either caused or help bring about this deferral and redesign. For all your help in this regard, I am extremely grateful. It is my hope the front verandas and gable roof can be saved intact in this reworked proposal. Though I suspect your help may again be needed to save this bit of the old Queen St.”

When reached for comment after the meeting, Lezell said he was pleased the CoA deferred the hearing to update drawings and consider the latest information from the City of Toronto and neighbour’s concerns.

“I am grateful for this process, which allows for the diverse needs and concerns of all parties to be voiced, so a healthy compromise that takes everything into consideration can be reached in a civil and respectful way,” he said in a written statement to Beach Metro News.

“Therefore we appreciate the feedback from our neighbours and have taken their concerns into careful consideration since after all, we are building a community centre we want the community to be proud of.”

Lezell said most if not all of the letters of objection referred to the original proposal submitted in May and that they “are confident that the changes we will propose will satisfy their concerns.”

He said he reached out to Wilson in September with a proposal that would blend the design of the duplex and require work on Wilson’s side of the facade at Lezell’s expense. Wilson opposes any work done on his side or any change to the front of the building.

“As this design is not feasible without Mr. Wilson’s consent, our architect is finalizing revised plans,” said Lezell

The updated proposal will include a redesign of the facade and one less storey that will result in the lowering of the building’s height by approximately 2.5 metres.

“We will post the detailed drawings once we consult with the neighbours and the city. With this design, we will create proper accessibility for the public with a grade entrance on Queen Street and an elevator to all levels including the rooftop deck. We want this community centre to be welcoming, with dignity and comfort, to all members of the public,” said Lezell.

To watch the CoA hearing from Oct. 6, visit https://www.youtube.com/watch?v=lLMeL24mjX8