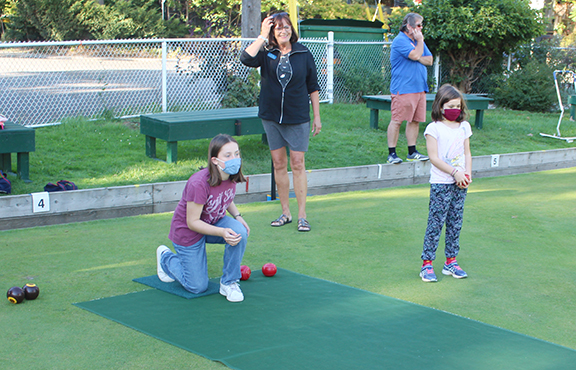 Some unfamiliar faces have taken residence on the bowling greens at the Balmy Beach Club.

Children from the Claremont School have been working on their bowls over the past few weeks with the help of club members and the Theatricks after school program. .

This group of kids is there to give lawn bowling a fresh and youthful image. Theatricks and the Club came together to teach kids about the sport, and to perhaps inspire a new generation of Balmy Beach lawnbowlers

Despite the perception of the sport as one that’s reserved for an older generation, the kids have taken to the game with a sense of splendour and joy all around. It’s also been a great way for them to get their minds off school, if only for an hour.

“It’s a calming sport. The kids now have a lot of worries and stresses that they’re carrying around with them. But they all seem to leave here with a smile on their face.” said Jeff Gillespie, founder of Theatricks.

“You’ve got the sound of the lake, the green, and you’re in this sort of tranquil oasis. The kids have found it very peaceful.”

Seeing people of every different generation out there on the bowling greens is a bit of an unfamiliar sight, though it may be one that pushes more people to try out the sport.

The Balmy Beach Club has been a staple of the community for more than a century, and offers a wide variety of sporting pursuits and activities. Admittedly, the sport of lawn bowling is one that is often perceived to be played by an older generation.

“Rather than having this club, this mysterious entity in the middle of our neighbourhood, with the perception that kids don’t go there. We’re building this relationship between members and the kids,” said Gillespie.

“They really enjoy passing their skills on, spending time with kids, and mentoring them,” he said of the members.

The kids seemed to be taking to the sport as well, and have become well versed in not only the proper ways to bowl but the strategy behind the game as well.

“I know that some of them are really enjoying it and picking it up. They’re learning lots of skills too. It’s a team sport, there’s lots of things that come with that,” said Dayle Snider, a member at the club and an organizer for this initiative.

“They’re learning math, angles, strategy, and a ton of useful skills. They’re helpful, they bring the stuff out, they tidy up, and they have great manners.”

Another important tenet that the kids are being taught while lawn bowling is the etiquette that comes with the game. Not running on the grass, not walking in front of others while they bowl, and most importantly, to respect the grass they’re standing on so as to not damage it.

Though the season is set to end soon, around Thanksgiving usually, the memories made by the kids here are sure to last as long as the Balmy Beach Club has stood.