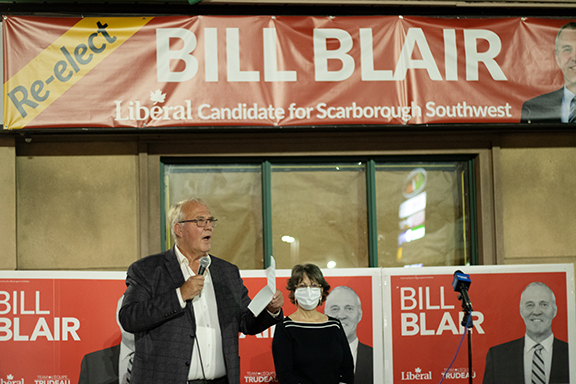 Bill Blair speaks to supporters outside his campaign office late on Monday night during the celebration of his win in the federal election. Photo by Michelle McCann.

Liberal incumbent Bill Blair has been re-elected for the third time as MP for Scarborough Southwest in Monday night’s federal election.

Mohsin Bhuiyan, the Conservative candidate was in second place with 20.8 per cent of the vote (7,016votes)

In third was NDP candidate Guled Arale with 16 per cent of the vote (5,399 votes)

Blair spoke to a large crowd of exuberant supporters around 11 p.m. Monday night outside his campaign’s office on Kingston Road in Scarborough.

He thanked the community and campaign staff for their efforts throughout the campaign.

“It’s a humbling thing to receive so much generous support from the extraordinary people who make this community a better place,” he said.

With the seat count relatively unchanged, questions around the decision to call a snap election during a pandemic are being raised by critics.

Blair said much has changed in Canada since 2019 and so the party was seeking a fresh input from Canadians on issues ranging from childcare to housing to climate change.

And he said he believes Canadians have given the Liberals a new mandate with Monday’s voting results.

As for his first job when he gets back to Ottawa, Blair said service to Scarborough Southwest trumps all.

“Job number one will always be the service to these people, the people in Scarborough Southwest who elected me,” he said.

The Liberals have won the riding in every federal election since 1988 – except for the 2011 election – when the seat flipped to Harris of the NDP.