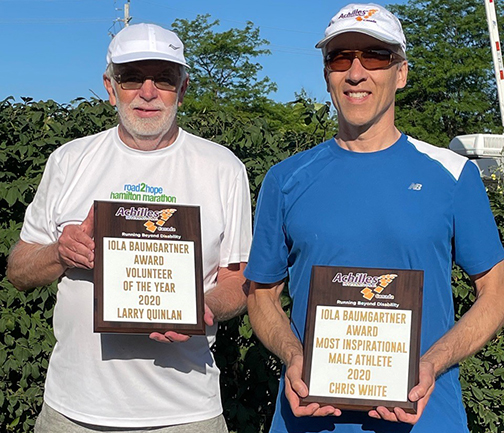 In remembrance of Iola Baumgartner and her community spirit, an annual award in her name was created by friend Jane Anderson and Achilles Canada president Brian McLean.

In a previous article dedicated to Iola’s memory, Anderson said, “She was liked and loved by so many people because she made an effort to connect with people. But she made the connections effortlessly. She liked people and liked to help them.”

Baumgartner was a longtime Beach resident and active community member who volunteered with Achilles Canada for more than 20 years.

“We celebrated our 22nd year of being a not-for-profit organization. What we do is we are predominately a running club that helps those that suffer from either a mental illness or a physical disability,” said McLean.

Achilles Canada “provides people with various disabilities an opportunity to receive the physical, psychological, and communal benefits of running,” according to the organization’s Facebook page.

Baumgartner was a guide runner and walker, and would walk athletes’ guide dogs so they could take a break while their owners run.

“Because she was such a big supporter of Achilles Canada, we wanted to do something in memory of Iola. Jane Anderson and I…and Iola’s family…decided to come up with this award that we will have yearly,” said McLean.

Three Iola Baumgartner Awards were given out in this summer based on each individual’s contributions in the year 2020. McLean said that these individuals were selected based on their dedication, especially in such a turbulent year due to the COVID-19 pandemic.

McLean said that all of the recipients live in the vicinity of the Beach and that many people come out for weekly group walks and runs every Saturday morning along the Boardwalk.

In addition to the awards honouring Baumgarter’s legacy, her family arranged for the planting of a commemorative tree on Lee Avenue on the north side of the Boardwalk. Baumgartner’s family is very appreciative of the efforts of the City of Toronto’s Parks Forestry & Recreation Division to have the tree planted.

Looking forward to next year’s awards ceremony, McLean is hopeful for the 2021 awards to be handed out at the St. Patrick’s Day race event that Achilles Canada hosts in Toronto.

“As of now for 2022, we have been given the green light that we can go live, however, we have to take into account the safety protocols for COVID,” he said.

McLean said that next year’s St. Patrick’s Day event will likely be a combination of a live and virtual race.

The Iola Baumgartner Awards will be handed out annually as a way to honour her contributions and volunteerism to Achilles Canada, and to recognize the dedication of volunteers and athletes.