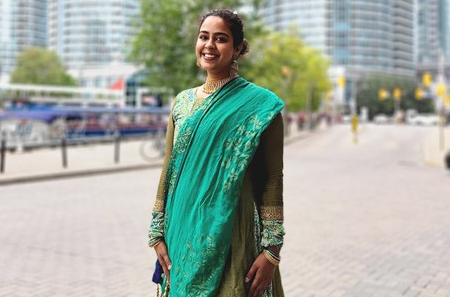 Habiba Desai is an independent candidate running in the riding of Toronto-Danforth in this month's federal election.

(EDITOR’S NOTE:  Candidates were instructed to keep their answers to approximately 150 words, and some of the responses have been edited to keep them as close as possible to the agreed word count.  Beach Metro News sent these questions to all eight candidates running in Toronto-Danforth. The only ones to respond by the stated deadline were Habiba Desai, independent candidate; Maryem Tollar, Green Party candidate; and Liz White, Animal Protection Party of Canada.)

I was born in 1992 and raised in Toronto-Danforth. I went to RH McGregor Elementary School, Cosburn Middle School, Leaside High School and University of Toronto. I was in the late French immersion program starting in Grade 6 and graduated with an honors bilingual French diploma from Leaside High School.

I have served our community for 16 years, starting with part-time tutoring and babysitting jobs for my neighbours since the age of 13. My first real job was as Key Holder of Fairweather in Gerrard Square at the age of 15. I am currently a humanitarian aid worker and prior to COVID-19 worked as an international development consultant for five years specializing in inclusive growth projects for the poorest women on the planet. I have worked with international organizations, governments and civil society actors.

I am running because it is my duty to serve my community as a leader in their time of need.

I commit to flying to England by November of 2021 and immediately having a meeting with the Queen of England to ask her to voluntarily leave Canada and return all lands to the Indigenous and Inuit peoples.  The entire exercise of colonialism was a mistake and resulted in such horrible evils such as the Residential School system.

Furthermore, the youth foster care and shelter system continue to create dehumanizing conditions for Indigenous youth. The solution is to create an independent housing complexes for male and female youth of each Indigenous community, with supportive members of the community to provide paid service in many roles from traditional Indigenous healers, wetnurses, Indigenous chefs, arts/culture training and physical/warrior training.

The 2015 calls to action are a framework upon which a new treaty can be developed between the Indigenous and Inuit peoples and the full independent and multi-cultural Canadian people through a Constitutional reform.

Tragedy. I would like to send a prayer to my grandmother who died of COVID-19 in Toronto and to all those we love and lost from COVID-19.

What have we come to as a society when we no longer respect our elders. I volunteered at Toronto East General Hospital (now Michael Garron Hospital) for four years, and I registered thousands of our elders in senior homes for their COVID-19 vaccines.

I would like to stop the isolation that comes with physical limitations and faced by our elderly population. Isolation is what allows for the deplorable conditions to exist.

One way it to create a senior-student housing complexes throughout Canadian universities. Our elders are the best source of lived knowledge and should be treated with the respect they deserve. These joint complexes provide many new activities for other elders in the community to come to as well and we can create a truly inclusive society.

I am fighting for the youth of my community by creating a five-star Khabib MMA Fight School & Academy so they can learn to fight for themselves while doing community service. This school will work to fight drug overdoses, gun violence and inspired terrorism.

We will make educated fighters, right here and they will be the future leaders of our community! Empowering these young men is the very start of a stable Toronto-Danforth for the next 20 years that will be filled with so much success and riches.

I will build first-aid houses on every block so that there is a first-aid kit, drug overdose kit and a safe space for children or women to run to for help.

Our most vulnerable in the community will be given the federal support they deserve. Once developed here, we will take these programs Canada-wide for the safest and strongest country in the world!