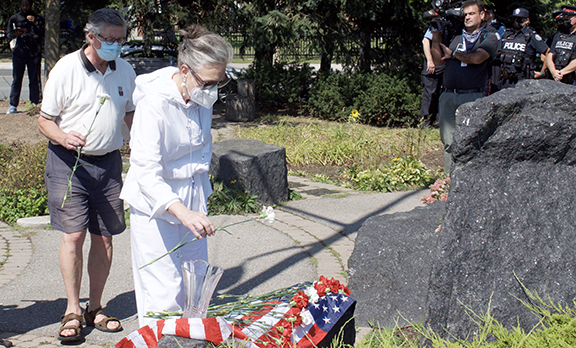 Those attending the Memorial Service to honour the people who lost their lives in the 9/11 terrorist attacks in 2001 lay flowers on the American flag at the Millenium Garden in Woodbine Park on the afternoon of Saturday, Sept. 11. Inset photo shows Toronto Police Chaplain Daniel Dihele with United Sates Consul General Susan Crystal at Saturday's ceremony. Photos by Amanda Gibb.

Community members gathered in the Beach on Saturday to honour those who lost their lives in the Sept. 11 terrorist attacks in 2001.

Facilitated by Community Centre 55, the ceremony commemorating the 20th anniversary of the attacks was held at the Millennium Garden in Woodbine Park.

Community Centre 55 volunteer Terry Coffin said in an interview with Beach Metro News that like many people, he remembers where he was and what he was doing when the four hijacked planes crashed, killing almost 3,000 people.

“It’s one of those days that comes around every year, but the 20th (memorial) seems to have a special resonance…It changed the world, that’s for sure,” he said.

The speakers shared stories about where they were on that day and acknowledged those who died in and as a result of the attacks, and the bravery of the first responders who rushed to help.

“Today we remember and pay respects to the innocent lives lost on 9/11, all of them gone far too soon,” said Crystal.

“We remember and pay tribute to the first responders who heroically risked their lives to save others, many who did not come out alive of the rubble. Today, we remember and honour the heroes who have given their lives since that day to protect our safety and freedom at home and abroad.” Crystal said that Canada stood shoulder to shoulder with the U.S. to share the grief and protect the countries’ shared set of values.

“You mourned with us at the consulate here in Toronto as well as throughout our mission in Canada. You brought flowers and tributes and memories of that day. We remember and are eternally grateful for your friendship and support,” she said.

In an interview with Beach Metro News, Leung said that he still remembers Sept. 11,  2001.

“I had just gotten hired on as a police officer and realized that there was nothing like this in my lifetime that has happened,” he said.

“I felt that (realization) that I’m a first responder and these kinds of things might happen, and we’re there to help people and push forth like the poem I read,” Leung added.

Jamie Rodgers, Commander, Operations at Toronto Paramedic Services, read the names of the 24 Canadians who perished in 9/11’s attacks.

Toronto Police Chaplain Daniel Dihele of 22 Division said that he was grateful for the presence of all who attended the ceremony at Millennium Garden.

“Many of us still carry a heavy burden of the memory of what happened. Since then, Sept. 11 has not passed in the calendar without our remembrance,” he said.

Dihele then lead a prayer to honour those lost in the attacks. The commemorative ceremony concluded with the laying of flowers in honour of those who were killed.