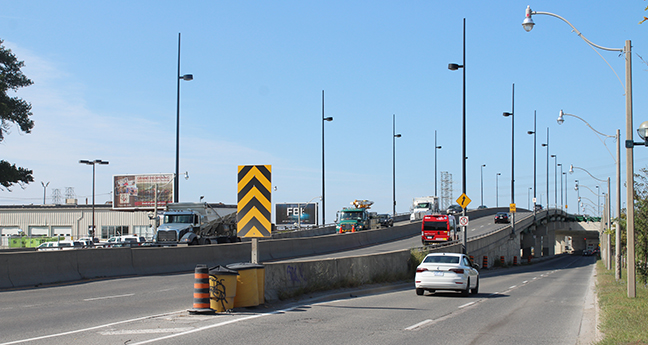 Traffic is seen on the Gardiner Expresswway's on-and-off ramps at Logan Avenue and Lake Shore Boulevard East earlier today. The permanent closure of the ramps goes into effect at 9 p.m. on Tuesday, Aug. 31. Photo by Alan Shackleton.

A major change in the way traffic moves in East Toronto is set to begin with the closure and upcoming demolition of the Gardiner Expressway’s off-and-on-ramps at Logan Avenue and Lake Shore Boulevard East.

The permanent closure of the ramps goes into effect at 9 p.m. on Tuesday, Aug. 31.

The expressway’s eastern most point will now begin and end at the Don Valley Parkway.

The work is part of the Gardiner Expressway Rehabilitation Plan and the Port Lands Flood Mitigation Protection Project.

Originally built between 1955 and 1964, the Gardiner Expressway once extended as far east as Leslie Street. However, that elevated part of the expressway known as Gardiner East was demolished in 2001.

Work on tearing down the ramps is slated to take place between September and November of this year. During that time, Lake Shore Boulevard East is expected to be closed on weekends between Carlaw Avenue and Cherry Street.

Also on weekends during September and October, the westbound Gardiner Expressway will be accessible from Jarvis Street. Also, Don Roadway will be closed between DVP and Commissioners Street and no access permitted to DVP. Access to the DVP will be via Eastern Avenue and Queen Street.

The teardown of the ramps will be followed by work on the Lake Shore Boulevard East Project which will see numerous improvements and changes to the road as it crosses the Don River. That work is expected to be completed by 2024.

Changes will include the widening and lengthening of the Lake Shore Boulevard East bridge over the Don River.

The re-engineered bridge’s additional space will accommodate bike lanes, pedestrian paths and a new linear park. It will also allow for the re-design and naturalization of the Don River as part of the flood protection, parkland and development plans for the Port Lands.

Also, Lake Shore Boulevard East between Don Roadway and Carlaw Avenue will be rebuilt to include new and safer intersections, and pedestrian and cycling facilities.

“This work will support planned realignment of the expressway to keep the roadway safer, facilitate broad improvements and liveability of the Port Lands area, improve public access to the Port Lands, and significantly enhance the City’s future climate resiliency through the Port Lands Flood Mitigation Protection work undertaken by Waterfront Toronto,” said Toronto-Danforth Councillor Paula Fletcher in a recent newsletter.

“There has been significant planning undertaken to ensure flow of traffic continues during and after construction such as changes to lane configuration and traffic signal timing. Reconstruction at nearby intersections and ramps to/from the Gardiner Expressway has also been planned and implemented to improve the traffic flow during construction. The Gardiner Rehabilitation Plan calls for new DVP ramps to eventually be built further north as well as the eventual construction of new access ramps at Cherry Street,” the newsletter said.

Once the Gardiner ramps at Logan have demolished, further full closures of Lake Shore Boulevard East are not anticipated.

For more specific information on the construction plans and road closure times, please go to https://portlandsto.ca/wp-content/uploads/Lake-Shore-Boulevard-East-and-Port-Lands-Flood-Protection-Construction-Notice-20-Final.pdf

For more on the Port Lands Flood Protection Plan and the reconfiguration and naturalization of the mouth of the Don River, please go to https://waterfrontoronto.ca/nbe/portal/waterfront/Home/waterfronthome/projects/don+mouth+naturalization+and+port+lands+flood+protection