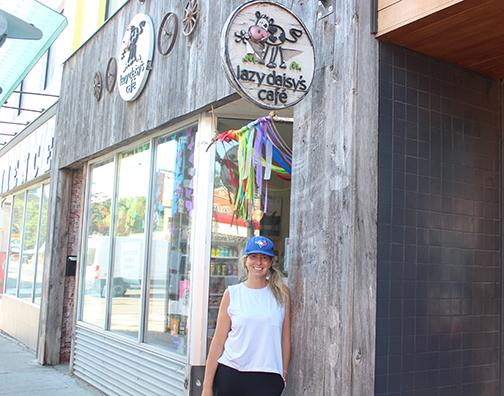 Dawn Chapman, owner of Lazy Daisy’s Café on Gerrard Street East, will be throwing out the ceremonial first pitch at tonight’s (Tuesday, Aug. 31) Toronto Blue Jays game versus the Baltimore Orioles at the Roger’s Centre.

Chapman has been asked by the Jays to do the first-pitch honours as a representative of small business owners in Toronto and the important role they play in the city.

“I got an email from the Blue Jays and at first I didn’t believe it,” Chapman told Beach Metro News this morning.

However, she checked and called back and it turned out a Jays staffer who lives in the East Toronto area and is a fan of Lazy Daisy’s Café had suggested Chapman as excellent representative for small business owners.

“They asked me if I would do this to celebrate small businesses, and of course I said yes. I was in a bit of shock and quite surprised to be asked. It came totally out of the blue,” she said.

Once it was confirmed she would indeed be throwing the first pitch, Chapman said she started practicing for tonight’s big moment.

“I played T-Ball as a kid,” she said. “I had been practicing from 60-feet out but I don’t have to throw it that far. They said I can throw the pitch from where I’d like, and I can manage 40 feet.”

Along with working on her pitching skills, Chapman also spent some time on what she will wear for tonight’s honour. She will be wearing an orange hat designed by Karyn Ruiz of Lilliput Hats in Toronto.

Chapman said she will have friends and family in the crowd at tonight’s game to cheer her on.

“I’ll have family in the stands, and we all get to stay and watch the game afterwards. I’m stoked. Hopefully, we crush it.”