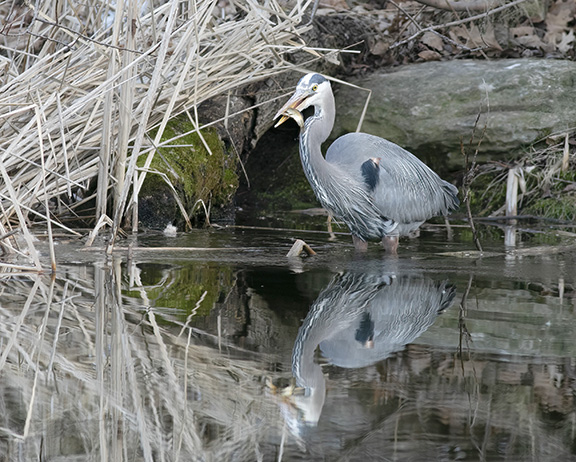 If you’re chatting with a neighbour, and they told you that a bird just landed on your roof, you’d probably assume it was something like a cardinal, a blue jay, or maybe a hawk. How would you react if, instead, if you saw a more than four-foot-tall bird perched up there?

Well, keep your eyes open because you never know when one of the Greater Toronto Area’s many great blue herons might drop by your place for a visit, like one dropped by my place not too long ago.

Now, while the above scenario is uncommon, herons are regularly seen this time of year, flying back and forth between their nests and their hunting grounds.

While it’s always exciting to see these giants in the air, I encourage you to go look for them, from a distance, along our many rivers, marshes, ponds, and lakes. What always makes me admire these incredible birds are their long legs and hunting techniques.

Like a ballet dancer, these herons can slowly, and gracefully, move through the shallow water hoping to drive a fish out of a hiding place. If their legs do their job, then the bird’s head, which was waiting with the tip of the beak on the water’s edge, will snap forward and snare the meal.

You’ll know the hunt was successful when the bird tosses its head up and backwards, allowing the catch to slide along the bill and down the throat. This behaviour will continue for hours, so don’t walk away just because the heron made one successful catch.

While a heron’s primary food source is fish, they will regularly eat frogs and have been known to eat rodents, reptiles, and other birds.

One of my best heron sightings: I was sitting on a rock at Tommy Thompson Park and watching a great blue heron dancing on the water. Instead of normal hunting behaviour, he was running, twisting his head and body, and turning himself around.

He would then take off and fly around for a few minutes, come back, settle in a marshy area of the lake, and then start the routine all over again. I don’t know if there was a female nearby whom he was performing for, or if he maybe mistook me for someone from National Geographic and he was trying to get his 15 minutes of fame.

Another sighting, at a local park along Woodbine, consisted of me just watching a heron soaking up the sun on a branch for a few minutes before flying away. I don’t know exactly why this moment stands out, but there was just something about the way the huge wings unfolded, started flapping, and then lifted the massive, yet delicate, heron into the air.

The grace of this huge bird seemed to perfectly unfold for me in slow motion.

The heron’s beak is like a long, yellow, thick, pointed and sharp spear.

If you’re wondering how to spot these birds, keep a few things in mind. Ontario does have a couple other large birds, and it’s likely to mistake a flying heron for a crane. Try to remember that a heron flies with its head held closely to its body, while a crane flies with its head fully extended.

But really, the best advice I can give you is if you see a really, really, big blue-grey bird, then it’s almost certainly a great blue heron.

I hope you enjoy the last bit of summer and get a chance to spot and observe a few of these amazing birds. Remember to socially distance yourself from our city’s wildlife!