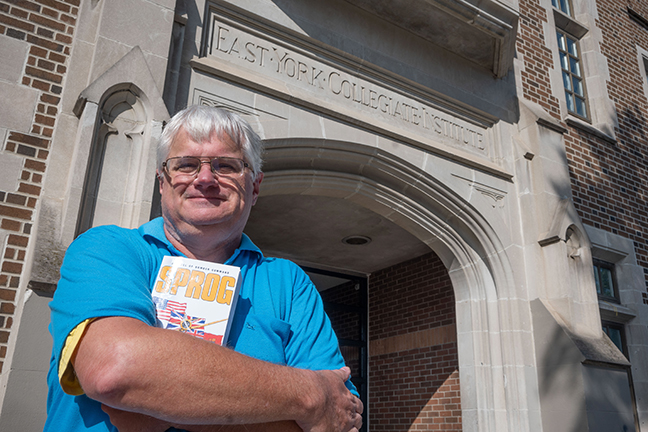 The book revolves around the young men who come from around the world to train in the British Commonwealth Air Training Plan. The BCATP was a joint effort between Canada, Great Britain, New Zealand and Australia to train the pilots that would fight in the skies over Europe.

More specifically, however, the story focuses on the humanity behind these young men and their transition from the innocence of adolescence to the bleak reality of warfare.

Kelly, who coordinates the sports journalism program at Centennial College’s East York campus, has been an avid military and aviation historian his whole life. He has been working on the book for 15 years.

Throughout that time, he has been painstakingly researching and assembling all the historical details necessary to create a story that honors the history it’s based on.

Details such as how the characters would have spoken and what their pattern of speech sounded like were thoroughly researched.
Even the technical aspects of the flight training process were double and triple checked through books and interviews with veterans who were there, said Kelly.

Many of the details in the book were also pulled from Kelly’s own life, as well as the lives of his family.

His father, a bandsman for the British Army’s Rifle Brigade, was one of the famous few survivors from the Battle of Calais. His mother lived in what he calls a “desperately poor neighbourhood” in Bristol, and narrowly survived a bombing raid with his grandmother by taking shelter under a staircase.

One of the chapters from the book is about a character who grew up in East York and attended East York Collegiate, as did Kelly.

Other familiar locations in the book include Cabbagetown, where another character grew up, and The Manning Depot by the Canadian National Exhibition grounds.

Considered one of Canada’s greatest contributions to the war effort, the BCATP trained 130,000 air crew.

Among them were more than 8,000 Americans who signed up to fight before Pearl Harbor brough America into the war. For these young men, waiting for their government to get involved in the fight against Hitler’s Germany wasn’t an option.

“There were so many Texans that one training unit liked to refer to themselves as the Royal Texas Airforce,” said Kelly.

The training took place in Canada, for which many were grateful because, unlike in England, there were no blackouts and there was no immediate risk, at least not from German attacks.

But there was still plenty of danger in the Canadian skies. Recruits would train in planes that were painted bright yellow for visibility, but with so many pilots learning to fly for the first time, many of these “yellow birds” still crashed or collided with each other during training, explained Kelly.

The goal of Sprog: A Novel of Bomber Command is to realistically portray what the experience was like and how it affected an entire generation of Allied fighters, said Kelly. He added that he is now working on a second book that is expected to be released in 2023.

Sprog: A Novel of Bomber Command is available for purchase locally at The Great Escape Book Store, 957 Kingston Rd.

It is also available for purchase online at a number of sites including Amazon.