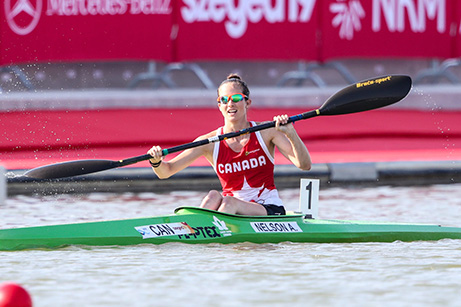 Balmy Beach Canoe Club member Andrea Nelson, will be representing Canada at the Tokyo Paralympic Games which begin this week.

Nelson is a member of the Canadian parakayaking team, which also includes Brianna Hennessy and Mathieu St-Pierre.

Her coach Ryan Blair will also be in Tokyo for the Paralympic Games which officially open on Tuesday, Aug. 24.

When Nelson, a Markham resident, first received the news that she would be representing Canada at the Paralympics she said was excited to be taking part.

Nelson was injured in a skydiving accident in 2017. While in rehab, she tried out several sports before meeting Blair who coached the Ontario parakayak team.

“I met my coach at the Paralympics search event that the Canadian Paralympic Committee was holding,” Nelson said.

The meeting was good timing according to Nelson as Blair was just getting the program started.

Kayaking and canoeing are two separate sports. The most notable difference is a blade on each end of the paddle for kayaking.

The talent identification program was created following the success of former Balmy Beach Canoe Club member Erica Scarff and her coach Mari Ellery. Scarff was a finalist at Canoe Kayak’s debut during the 2016 Rio Paralympics.

Blair, who is a Beach resident, hopes to get athletes identified by the talent program on the international podium within three to four years.

“We realized there was an opportunity to really enhance the pathway to the Paralympics within a shorter time period than our able bodied athletes,” Blair said, noting that it can take eight to 20 years before able-bodied athletes reach the international level.

Nelson’s work with the program already produced impressive results. She won two medals in the 2019 Pan American Paracanoe Championships in Brazil, placing second in the 200-metre race and third in the 500m.

Nelson qualified for her position in Tokyo by finishing fifth at 2019 world championships in the 200m race.

The coaching staff provides support and training for the athletes at the Paralympics. A team of professionals help ensure they are ready for the events.

“We’ve been more focused as we get closer and closer and really trying to ensure that we get the best results possible,” Blair said.

When it comes to training, Balmy Beach Canoe Club is the only place where Nelson can practice with her boat.

The club is a non-profit organization dedicated to promoting canoeing and kayaking within the Beach community. It accommodates all members, whether they are pursuing sport at a casual or professional level.

“There’s multiple people from Balmy Beach Canoe Club that have been on the national team,” Nelson said.

“You kind of have to go to a canoe club unless you want to share your boat on your car every time you go,” Nelson said.

“Honestly, paddling, kayaking, and doing weights to get tougher as well,” Nelson said, describing her routine.

While she did not discover kayaking until after her accident, she has seen how disabilities can impact how athletes approach the sport.

“If you have full function your legs and core are really involved in paddling,” said Nelson. “You’re using your body instead of just your arms.”

Parakayaks are also wider to allow for better balance for the athletes.  “A lot of us are missing some function which affects our balance,” said Nelson.

While there are COVID-19 concerns surrounding Tokyo and the Paralympic Games, Nelson said feels safe as she has been fully vaccinated.

“The International Olympic Committee has donated doses so athletes were able to make sure they got doses before the Games without taking those doses away from anyone else,” said Nelson.

Following the Paralympics, Nelson plans to finish up her post-grad in therapeutic recreation.

Eleanor McIntyre, Commodore of the Balmy Beach Canoe Club, expressed her admiration of Nelson in the hard work she puts in.

“I couldn’t think of a better ambassador for our paddling program at Balmy Beach Canoe Club,” said McIntyre.

Competition on the water for kayak and canoe at the Tokyo Paralympics begins on Sept. 2.