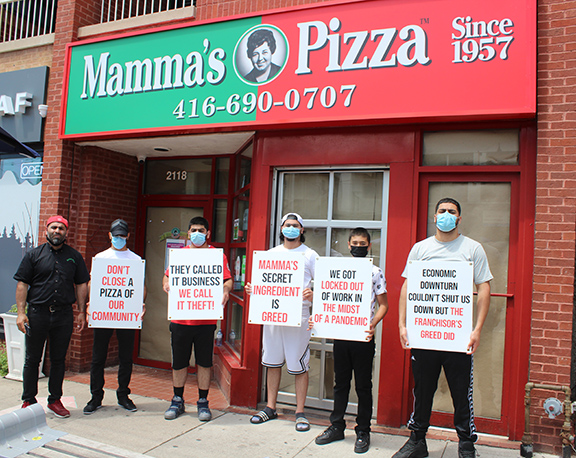 Ajmala Anwari is joined by family members and other supporters in protesting the actions of the owners of Mamma's Pizza who have locked him out of his franchise on Queen Street East in the Beach. Photo by Alan Shackleton.

After 17 years, the longest running franchise owner in the Mamma’s Pizza chain found himself locked out of his own store.

On June 29, when Ajmala Anwari, or Ozzy as he’s known to the community, arrived at his Mama’s Pizza on 2118 Queen St. E., he found the locks had all been changed overnight.

Leading up to this has been a two-year dispute over the new franchise agreement for the business.

When Anwari’s agreement was up for renewal in April of 2019, he was surprised to see that not only did his franchiser agree to a rent increase with the landlord, but that it was for a considerably higher rate than the market price for the Beach.

Anwari spent thousands of dollars of his own money to renegotiate the lease agreement that franchiser agreed to.

He got a better deal on rent but part of the agreement was replacing the exterior sign of the business, something else he would have to pay for out of pocket.

Eventually he got a meeting with the new owners, wherein he was presented with a new contract. One with different terms from the original, he said.

Anwari estimated that under the new contract his fees increased by roughly 70 per cent. The new owners also asked for a $10,000 renewal fee — double the original renewal fee he usually pays — along with access to bank accounts and new Visa terminals that would pay them directly, Anwari said.

“It was a model for corporate, not a franchise,” he said.

According to Mamma’s Pizza, Anwari didn’t have a standing contract with the previous owners since he didn’t agree to sign it. Anwari said they had a “deemed contract.”

A statement from Mamma’s Pizza’s head office said they “attempted to work with the now former franchisee for two years to execute the five-year renewal agreement as contemplated by the franchise agreement.”

“It was either sign their proposed terms or they would possess the store because we have no agreement,” he said.

He added he is confident however that the community will come out to support his cause.

As of the first week of August, the store was open and being run by head office not a franchisee. Anwari is continuing his protest outside the store, carrying a boycott sign while walking on the sidewalk.

“People are smart enough to understand that this is not over $75,” he said of the dispute. “I give $75 worth of pizza for free every single day. To the troubled ones that are on the street, to the kids that forget their lunch money.”

The biggest loss to him would be these relationships he’s built as the face of Mamma’s Pizza in the Beach over the past 17 years.

“I’ve literally seen kids in the stroller that are 25 years of age now,” Anwari said.

So, for now, he and his family are protesting until his concerns are heard.

“Instead of doing my hours inside the store, I’m doing them outside,” he said.