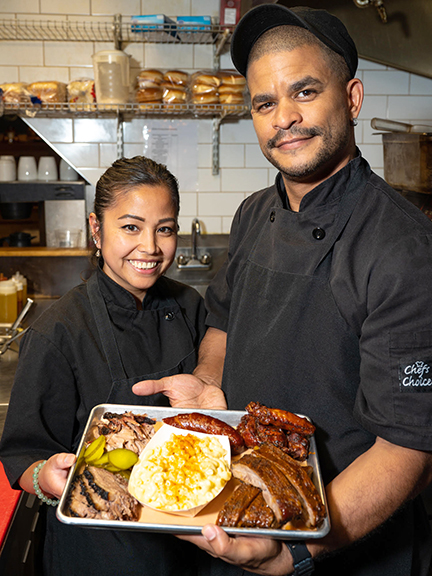 Humans of the Danforth will be displayed in store windows in GreekTown on the Danforth from Aug. 6 to Sept. 5. The East End Arts initiative features photos by Henry VanderSpek. Above photo shows Lina and Dustin Samuels of the Greenwood Smokehouse. Inset photos show Jim Tsafatinos of Kalyvia stirring a pot; and George Christopoulos of Apollon Pharmacy.

Henry VanderSpek, in collaboration with East End Arts, has been knocking door to door taking photos of various business owners for the project, Humans of the Danforth.

The initiative is a celebration of GreekTown on the Danforth business owners who have had their livelihoods impacted throughout the COVID-19 pandemic. For VanderSpek, Humans of the Danforth is a good chance to connect them more to the community.

“Pretty much every business has something touching about how customers have supported them,” VanderSpek said, noting how the community has helped out local business owners during the pandemic.

Starting in August, visitors can examine these murals for free throughout GreekTown. The exhibit is set to last the entire month and will encompass streets along Danforth Avenue from Hampton Avenue in the west to Dewhurst Boulevard in the east.

The exhibit will be entirely outdoors with the photos and descriptions on the windows. Images will also be displayed at Pape Library and Chester Station.

Viewers can scan a QR code on the windows for an interview with the person photographed. Making the event outdoors also helps with social distancing as viewers won’t have to crowd around indoors like in a museum. “I love the idea of using windows of stores, people are there already,” VanderSpek said. “They’re going to see people that they might recognize or they’re going to stop and take notice.”

All digital and decal handling is done by STEPS Public Art, a project specializing in creating art in urban settings. Viewers can access these interviews through the STEPS Public Art app available on android and IOS.

“All the business owners were very busy, but they were very kind to make time for me to do the interview,” VanderSpek said.

VanderSpek interviewed and photographed 26 businesses in preparation for the event. Arranging times were hectic with appointments being anywhere along Danforth Avenue.

Many of the photos are framed to reflect the workplace of business owners. Photography is something VanderSpek has been involved with most of his life. He credited his father as an influence, having been exposed to his work as a child. As an adult, VanderSpek worked for various non-profit organizations such as World Vision. His work took him through Canada and parts of East Africa.

Prior to Humans of the Danforth, VanderSpek has worked on Taxi Drivers of Toronto. A documentary with various photos showing both drivers and city life in Toronto. The project spanned four years and was officially released in 2017.

“Executive Director Shana Hillman (of East End Arts) mentioned that is why they wanted to choose me for this,” VanderSpek said. “Because they felt what I did was right in line with what they wanted for this project.”

Humans of the Danforth will officially unveil on Friday, Aug. 6. All photos were taken by Henry VanderSpek in collaboration with East End Arts. Digital and decal handling was done by STEPS.

The exhibit will continue until Sept. 5.

Funding for the project was provided by the Greektown on the Danforth BIA through the BIA Innovation Fund.

For more information on Humans of the Danforth, please visit East End Arts’ website at https://eastendarts.ca/humans-of-the-danforth/