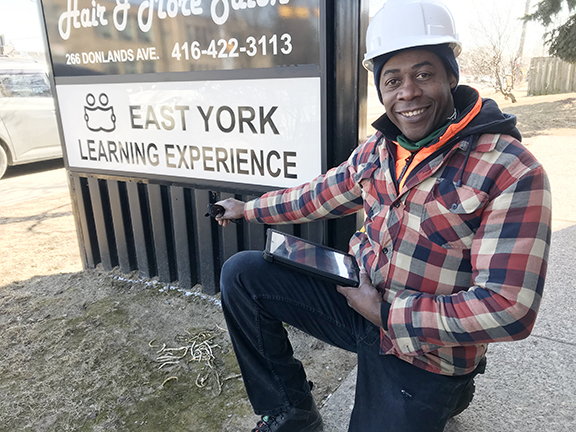 Perez Brown turned to the East York Learning Experience to help him improve his math skills and realize his goal of becoming an electrician and running his own business. Photo by Alexandros Varoutas.

Since 1987, East York Learning Experience has been helping adults in East Toronto elevate their skills through their award winning, one-on-one literacy program.

EYLE’s goal is to help adults update their literacy skills and achieve whatever goals they’re aiming to meet in their lives.

Whether they want to gain or maintain employment, enter a school or apprenticeship program, or simply bolster their independence while navigating their daily lives, the volunteers will help lay out a path to that goal.

Students are referred to EYLE for many different reasons. If someone wants to enroll in adult school but doesn’t have the minimum basic skills to qualify, they might be referred for tutoring at EYLE instead.

Around half of the students, though, are actually brought in via word of mouth from other students who have themselves seen the results of the program.

Volunteers at EYLE assess which skills need to be improved, and develop a learning plan for each student that’s catered to their needs and learning style.

Ian Kinross, a volunteer and one of the directors at EYLE, has been tutoring for a few years now and finds the experience to be a two-way street.

After working with one of his students to develop their reading skills, he realized that he, too, was learning ways to improve his own reading habits.

“My learner reads slowly, but he reads deeply and he reads to understand. When we take up a reading assignment it’s a wake-up call for me,” said Kinross.

Kinross believes people shouldn’t miss out on a job opportunity that they might be perfectly qualified for just because they’re struggling with the application process, or with just one specific element of the job.

Perez Brown, a former student at EYLE, went in with the goal of upgrading his math skills.

After health issues required him to switch away from his job in construction, he considered making a shift towards being an electrician. The only challenge was the amount of math the job would involve.

In school, Brown did well across the board but always struggled with math. Even teachers didn’t understand why he struggled so much more with one subject than all the rest.

“I ended up internalizing this, a little bit, and thinking ‘well, maybe I couldn’t really learn math for whatever reason,’” he told Beach Metro News.

But when the time came for a career change later in life, Brown decided to reevaluate his abilities.

After an initial consultation, Brown was amazed at the approach EYLE took to learning after discussing his learning style for the first time.

“I remember being blown away by that idea – that people learn in different ways. The tests showed I was a strong visual learner,” he said.

Brown now owns a small business where he uses his skills on a daily basis thanks to his time at EYLE.

Gail McCullough has been part of the team at EYLE for the past 31 years. She is now the director and has seen the positive effect the program has in the community, year after year.

“I can’t tell you how many people we’ve had in our program who have never voted in their lives,” she said.

For this reason, it’s been important to continue the program even through the COVID-19 pandemic.

The lockdowns and restrictions have prompted a switch to remote learning. This has created challenges for the learning curve, not just for learners, but the tutors as well.

“Not all of our students are computer literate or have access to computers and technology,” said McCullough.

This is another focal point of the program. Aside from traditional skills such as reading, writing and math, EYLE also offers digital literacy tutoring for those who need help with using technology and navigating the internet.

Some changes had to be made to ensure that everyone was able to continue working with their tutors.

For some, it was a bit easier getting online for virtual learning.

But, in the end, even for those who couldn’t get online, volunteers would photocopy resources and drop them off if that’s what it took.

Khim Tang is an example of how much of a difference this level of commitment can make.

Born and raised in Cambodia and Thailand, she immigrated to Canada with minimal English skills.

As a single mother, she wanted to go to college and find a career that would support her and her daughter, but application meant passing an English exam.

She was referred to EYLE by Homeward Bound, an organization that helps single mothers pursue education and employment.

EYLE helped bolster her skills and prepare her for the entry exam. After being admitted to her program, she stayed on board and continued to receive one-on-one tutoring with assignments she had to complete.

Throughout her schooling, Tang said EYLE took a passive role and allowed her the space to do things on her own.

Instead, they would simply look over and occasionally make suggestions on changes, but never took over the process.

“It’s like knowing you have a mother or father to support you,” she said.

Today, Tang is a change analyst at a bank and relies on the skills she learned at EYLE regularly.

“Before I started at East York Learning Experience it took me hours and I still didn’t even know if it was right,” she said.

For volunteers like McCullough, stories like this make it easy to come back year after year to continue tutoring because “everybody deserves literacy.”