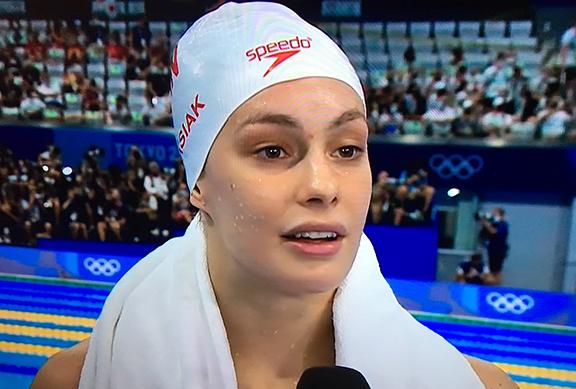 Beacher swimmer Penny Oleksiak is shown being interviewed by CBC Sports on July 29.

The 21-year-old Oleksiak is expected to swim the freestyle leg for the Canadian women’s 4×100-metre medley relay team on Saturday, July 31, night at the Tokyo Olympic Games.

And if the Canadian women can reach the podium, Oleksiak will become the most decorated Canadian Olympic athlete in history with seven medals.

With two medals so far in these Tokyo Olympics, and four medals at the 2016 Rio Olympic Games, Oleksiak is tied at six with Clara Hughes and Cindy Klassen for most ever won by a Canadian Olympian.

Hughes won her six Olympic medals through a combination of cycling in the Summer Games and speed skating in the Winter Games. In the Summer Olympic Games in Atlanta in 1996 she won bronze in cycling road race and cycling time trial. In Winter Olympics she won four medals in speed skating — gold in the 2006 Turin Games in 5,000 metres, silver in 2006 in team pursuit; bronze in 2002 Salt Lake City in 5,000m, and bronze in 2010 Vancouver in 5,000m.

Tonight’s race will be Oleksiak last opportunity at the Tokyo Games to win that seventh Olympic medal.

Oleksiak’s medal count for Tokyo consists of a bronze in the 200m freestyle and a silver in the women’s 4x100m freestyle relay. In Rio, she won a gold, a silver and two bronze medals.

Last Thursday, July 29, Oleksiak had a chance to swim into the history books with her seventh medal during the final of the women’s 100m freestyle, the event she won gold in at the Rio Olympics.

However, despite swimming a personal best and Canadian record time of 52.59 seconds in the race, Oleksiak finished in fourth place.

Oleksiak was off the podium in the July 29 race despite finishing the 100 metres in a time that was faster than she swam in the same race to win the gold in Rio. In that 2016 race, Oleksiak won gold with a time of 52.70

The bronze medal finisher in the race in Tokyo was only .07 seconds ahead of Oleksiak.

In an interview with CBC Sports after Thursday’s 100m freestyle final, Oleksiak said she felt she could have gotten off to a better start in the race and was not pleased with her turn at the 50-metre mark, but was happy to see such a fast swim.

“I’m honestly kind of happy the final was so fast. It just shows that women in the 100m free are really moving forward,” she said.

“I really tried to bring it home and I did my best. It’s still fourth in the world so I’m not complaining,” Oleksiak added.

She said in the interview with CBC that she is aware she is on the verge of making Canadian Olympic history in Tokyo.

However, Oleksiak also clearly signalled in the CBC interview that at age 21 she has no intention of calling the Tokyo Games her final Olympics and tonight will not be her last chance to make it seven.

“It makes me excited to race in 2024 and see how I can figure out the race a little more,” she said.

Oleksiak later added that Tokyo “isn’t my last Olympics. Just learning from this.”