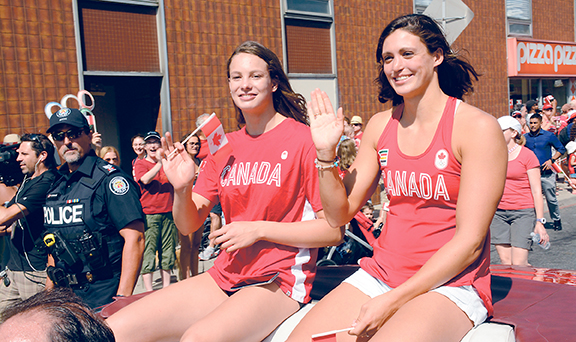 Penny Oleksiak, shown at left in this Beach Metro News file photo from 2016, swam a time of 1:54.70 to take the bronze medal in the women's 200-metre freestyle at the Tokyo Olympics tonight. The medal win gives Oleksiak a total of six Summer Olympic medals, a Canadian record.

By winning a bronze medal in the women’s 200-metre freestyle race at the Tokyo Olympic Games on the night of Tuesday, July 27 (the morning of July 28 in Japan), Oleksiak becomes the most awarded Canadian Summer Olympics athlete of all time.

With four medals to her credit from the 2016 Rio Olympic Games, and a silver in the women’s 4x100m freestyle relay earlier in Tokyo, 21-year-old Oleksiak has now won six medals at the Summer Olympics.

Prior to tonight’s 200m race, Oleksiak was tied with rower Lesley Thompson-Willie and runner Phil Edwards for most Summer Olympic medals won by a Canadian athlete at five.

In her two Olympics, Oleksiak has now won a gold, a silver and two bronzes at Rio; and a silver and a bronze in Tokyo.