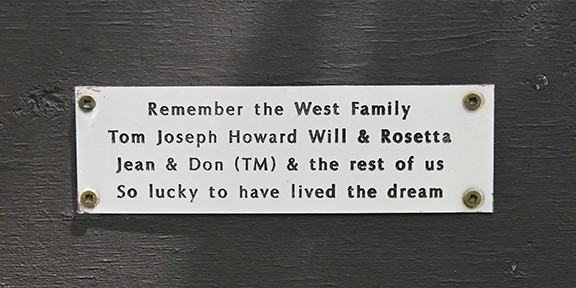 Memorial plaques in southwest Scarborough’s Rosetta McClain Gardens tell the stories of many lives lived, and also touch on the area’s history. Photos by Erwin Buck.

Rosetta McClain Gardens is a jewel in the Toronto parks system. It is well known to flower connoisseurs, bird and butterfly watchers, arborists, and for its spectacular view of Lake Ontario.

The origins of the park date back to 1904, when Thomas West bought a 40-acre farm overlooking Scarborough Bluffs in an area now known as Birch Cliff. He and his wife, Emma, divided the farm among their four children, one being Rosetta. She married Robert McClain and they lived on the property.

Remnants of their homestead are still visible today. Robert and Rosetta, along with brother Joseph made many improvements to the property in the form of gardens and walkways, many of which are still evident today.

Some years after Rosetta’s death, Robert bequeathed the property to the city to commemorate his wife. With some donations of adjacent land from Rosetta’s brothers, a 22-acre park was created.

Scattered throughout the park are many tree or bench memorial plaques.

Here is a brief glimpse into the lives of some of the people memorialized at Rosetta McClain Gardens.

Fittingly, a bench — situated in what might have been the front yard of the McClain House — is dedicated to the West family: father Tom and children Joseph, Howard, William and Rosetta.

Nearby, is a tree memorial for Dana Marmoreo who was born with Down syndrome. In her early 20s she joined the Pegasus Community Project for Adults with Special Needs. Learning new skills and gathering confidence, she blossomed into a young lady with a strong sense of humour and happiness. Her numerous sayings, known as ‘Danaisms’ within the family, became part of her family’s everyday conversations. At age 30, she died of leukemia.

Eileen Hardacre passed away at age 94. She was a crossword puzzle lover, a Jeopardy master, an enthusiastic snow shoveler and hedge trimmer extraordinaire. She was also well known for her shortbread. With her husband, Ken, they built a lakeside retreat in Buckhorn, Ontario, where they and their families enjoyed many happy years. Marc Tardiff was a retired lawyer who had a fiery spirit, a great sense of humour and passion for literature and history. He died suddenly while on a trip in Chile at age 59, leaving behind his wife, two daughters and 12 brothers and sisters.

Theresa Ridell passed away in her 101st year. She had been married to John Ridell and at the time of her death, they had eight children, 15 grandchildren and 11 great-grandchildren. She was described as a force to be reckoned with who displayed incredible and unconditional love.

Maureen Sims, wife, mother and grandmother was the executive director of COFAS (Council Organization of Faculty Association Staff) at Ryerson. She received an ‘Above and Beyond Award’ in 2009. The award recognizes individual acts of service that are an inspiration to others.

Philip Peacock was 95 when he passed away in 2018. Leaving home at age 14, he joined the British Merchant Navy. He travelled all over the world, kindling a passion for travel that he would share with his wife Iris. During the war years, he was involved in the evacuation of Dunkirk. After a long career at Sears Canada, he helped his wife set up and run a design company. He loved nature and always had an eye on the horizon. He was often heard to say, ‘Look at that sky.’

Philip’s wife, Iris Estelle Peacock, was born in England. She came to Canada in her early twenties with $20 in her pocket. She found a job in a typing pool at CIBC. In time, she met Philip and together they raised a family of four children. Once the children were older, Estelle used her skills learned in art school to start a needlecraft company. Philip came out of retirement to lend his business expertise. The company, Estelle Designs, grew to be a successful hand knitting yarn importer that is still going strong, 45 years later. Del Dako was a horn player, vibraphonist, composer and teacher. As a saxophonist, Del won numerous awards and played with many jazz greats including Jim Galloway’s Wee Big Band. He was also a white-water canoeist who pioneered descents of remote rivers once considered impossible to open boats. As an alternate career, Del was an itinerant teacher for the Scarborough Board of Education, spreading the gospel of jazz. Two of his students went on to form The Barenaked Ladies. He was as comfortable in the wilderness paddling or skiing as he was in downtown jazz joints. He died in 2013 at age 58.

Phyllis Agg was a great supporter of the arts and a ferocious organizer. During her long career as a teacher, she formed many long-lasting relationships with students and colleagues. According to daughter Jen, Phyllis had so many friends it was hard to keep track of all of them. She met her husband-to-be while teaching at Birchmount Park Collegiate. He was her first love, and she was his. They married in 1969 and renewed their vows 40 years later. When David developed Alzheimer’s, Phyllis became his primary caretaker. She predeceased him by three years, at age 70. Sandra McArthur was an accomplished singer and musician who taught theory and ran a music school. Although born in Canada, she had a strong Scottish family connection. She sang as a soloist in both the Holy Blossom Temple and St. George’s On The Hill choir for many years. On the day of her funeral, her long-time partner, Karen Rymal, heard an old Scottish folk song on the radio — The Skye Boat Song. During the funeral service at St. George’s, a swallow in the church flew over the spot where Sandra would have normally been standing with the choir. The swallow flew in circles for the entire service. Hence, the inspiration for the quote on her plaque: Fly on the wings of a bird/over the sea to Skye.

A bench in the southwest corner of the park is dedicated to Frank Butson, a well-known and well-loved bird watcher. Big Frank, as he was known, founded the Rosetta Raptor Watch. This group of seasoned and new bird watchers documents hawk sightings during the annual fall migration. It continues to this day, and in just one year, they can see more than 11,000 raptors soaring above Lake Ontario. Big Frank had an infectious love for birds and butterflies that had no limits. For years, he could be found at the park from sunrise to sunset with his binoculars, standing at the chain link fence overlooking The Bluffs. He was the first to document that the park was on a migration route for raptors and other birds. He inspired countless people to become avid bird and butterfly watchers including regular Beach Metro News contributor and On The Wild Side columnist Ann Brokelman. Big Frank embodied the essence of teaching and learning in a simple and passionate way. Not without humour, he was once approached by an onlooker while standing at the fence with his binoculars. When asked what he was looking for, he replied “My first whale.” Butson passed away in 2013 at age 48.

If you’ve never visited this park, or even if you have, Bob Forbes’ memorial plaque offers good advice: “Rest awhile and enjoy the peace.”