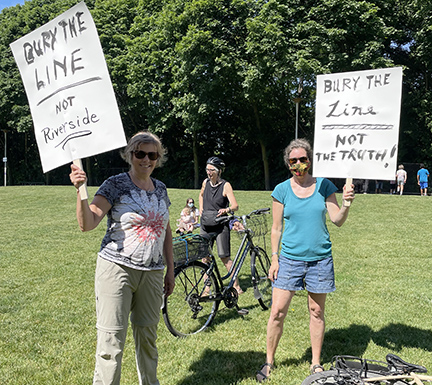 At a recent Save Jimmie Simpson Park rally, more 200 residents came together at the park northwest of Queen Street East and Booth Avenue to voice their concerns over the environmental impacts, loss of trees and green space, and noise pollution related to the plans for the section of the Ontario Line proposed to run above ground through South Riverdale, Riverside and Leslieville.

“Metrolinx is making decisions about transit that don’t really benefit communities,” said Toronto-Danforth Councillor Paula Fletcher as she addressed the crowd at the rally on Saturday, June 19.

“I didn’t know how badly you can mess up public transit,” added Toronto-Danforth MPP Peter Tabuns, who also spoke at the rally.

The proposed above-ground station is slated to be built on the existing railway corridor that runs between Bruce Mackey and Jimmie Simpson parks, north of Queen Street East.

The corridor currently has three tracks within the railway property line. Metrolinx plans to add three more tracks within that corridor, and has said that it will not disrupt any park space in the area.

“Contrary to their claims that they can ‘minimize’ impact on parks, it looks to us that virtually every tree lining the corridor is doomed to be cut down, and much of Bruce Mackey Park, Gerrard Dog Parkette and Saulter St Parkette may be lost,” said Save Jimmie Simpson! rally organizer, Eon Song in an interview with Beach Metro News.

Song said Save Jimmie Simpson! wants Metrolinx to commit to the following:

Song added that in his opinion the consultations Metrolinx has had with the South Riverdale community in the past are not actually consultations, but rather webinars that simply tell residents what the plans are.

“This has been a shameful process with no meaningful community input. I believe that their [Metrolinx] plans will devastate the neighbourhood,” said South Riverdale resident Denise Coombs at the Save Jimmie Simpson rally.

The following week, on June 24, Metrolinx held a virtual open house and Q&A session to address community concerns about the Ontario Line. The video and presentation slides can be found at https://www.metrolinxengage.com/en/OLLiveEJune24

In the presentation, Metrolinx stated they are currently conducting an Environmental Condition Report of the railway corridor and surrounding area. The study, as per Metrolinx, includes an assessment of the natural environment, soil and groundwater, air quality, noise and vibration, and traffic and transportation among other elements.

From there, they will conduct an Environment Impact Assessment Report in early 2022. For the Ontario Line, Metrolinx’s timeline of activities spanning from 2020 to 2023 includes four Public Review & Comment sessions and “Ongoing Public Engagement”.

Regarding the decades-old trees that abut the railway corridor, and where the noise wall plans to be built, Metrolinx said they plan to work with arborists to take an inventory of the trees.

If trees need to be cut down, they will work with the City of Toronto to replace them in other locations in the Riverdale area, Metrolinx said.

“The impact will affect us for the next 100 years. It’s important that we do it correctly. We need to prioritize trees, parks and people instead of trains,” said resident Pierre Bechereau at the June 19 rally.

In the June 24 virtual meeting, residents also wanted to know the time and cost comparison to build an underground station versus keeping it above-ground. Metrolinx estimated that it would cost around $800 million more and potentially add up to 24 months in construction time for the line to be underground through South Riverdale.

“We are fundraising to fill the gaps in Metrolinx woefully inadequate environmental assessment,” Song said. “Once the study is done, we will be lobbying at three levels of government to ensure that the final Ontario “ine design reflects findings of the HIA.

Though there is no set construction date for the railway corridor work in the Jimmie Simpson Park area to begin.

When completed, the Ontario Line will run from the Ontario Science Centre, near Don Mills Road and Eglinton Avenue, heading southwest and ending at the Canadian National Exhibition grounds.