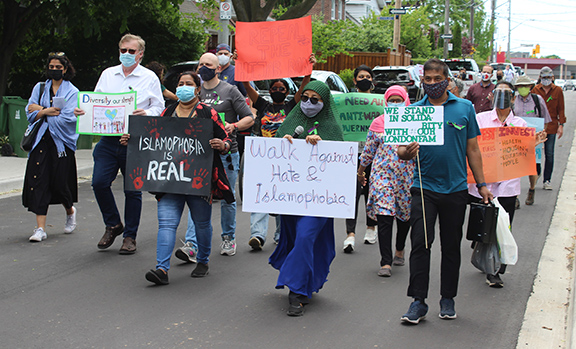 The Walk Against Hate on Friday, June 11, makes its way to Dentonia Park. Photo by Alan Shackleton.

A Walk Against Hate was held along Danforth Avenue and in Dentonia Park on the afternoon of Friday, June 11, to show solidarity with the victims of the hate crime in London, Ontario, earlier this week that took the lives of four members of the same Muslim family.

The walk began at Shopper’s World at noon, headed north on Thyra Avenue to Dentonia Park for a rally, and then back to Danforth Avenue.

A large crowd took part in the walk and at the rally in the park which included a minute of silence in remembrance of Salman Afzaal, 46, his 44-year-old wife Madiha Salman, their 15-year-old daughter Yumna Afzaal and Afzaal’s 74-year-old mother.

The four London, Ontario residents were killed after a 20-year-old man intentionally drove his pickup truck into the family while they were walking on the sidewalk on the evening of Sunday, June 6. Fayez Afzaal, 9, was the only survivor and is now an orphan as his entire family was killed.

The murder of the family has been condemned across Canada and around the world as a hate-crime and an act of terrorism.

Along with showing support for the Afzaal family and the Muslim community, those taking part in the walk and rally demanded action be taken against hate crimes and Islamophobia.

“We have to do more than send out our thoughts and prayers,” said Berns-McGown. “It isn’t enough. We need actions.”

Begum, who is Muslim, said hate and racism exists locally and she experienced it herself firsthand when she came to Canada with her family in 1999.

“I came to Canada in 1999 and I faced racism the first week. And we are still here talking about this.”

How people can be full of so much hate towards others that they would kill them, is beyond her understanding.

“We pray for those with so much hate in them that they are willing to kill,” she said. “We need real action to educate people about our peaceful religion.”

Both Begum and Berns-McGown expressed confusion as to why the Province of Ontario has not yet enacted into law a bill approved by all MPPs at Queen’s Park more than two years ago to declare Jan. 29 as Day of Remembrance and Action on Islamophobia.

The private members bill (Bill 83) was put forward by Berns-McGown in March of 2019.

The date of Jan. 29 was declared since it was on Jan.. 29, 2017, that six people were killed and 19 others hurt during a terrorist attack at a Quebec City mosque.