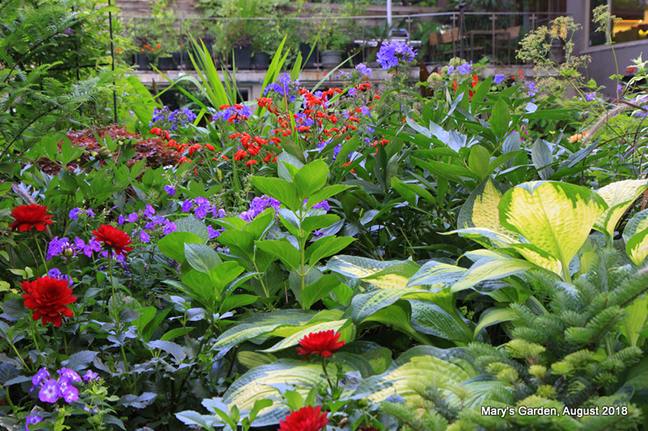 Paul Zammit took the photos above and below of Mary Gore's garden which was recently featured in the American magazine Fine Gardening.

Where do accountants go when the busy tax season ends on April 30th?

If you are Mary Gore, you retreat to your shady Beach garden that graced the cover of prominent American gardening magazine Fine Gardening this April, featuring photographs of the one-acre ravine lot that she calls her “Secret Garden.”

Having subscribed to the magazine for several years, to be featured in it is was “like winning an Olympic gold medal.”

In 2019, her property was included in the Toronto Botanical Gardens (TBG) tour. More than 2,500 visitors were in her garden that weekend to see her green thumb at work, some travelling from out of country.

This led Paul Zammit, then a director of horticulture at TBG, to invite an editor from Fine Gardening to join him for a tour of the garden, after which she decided it would be a perfect space to feature on their pages.

Paul photographed the garden throughout 2020 as the seasons changed. The Gore family moved to their current home in 2004 and Mary realized over the next years that the yard was the perfect blank canvas for her art, beginning work on her masterpiece in 2008.

Showcasing numerous Japanese maples, her garden design has at times been less than traditional. Before choosing where each tree would live, she and her daughter took turns standing on the spot with arms outstretched to gain a sense of how they would fit into their surroundings.

Now 13 years later, there are plateaus of winding beds with steps leading down to the foot of the ravine. Small paths wander off past some of the half a dozen waterfalls, and then rejoin one of the main walkways before spilling out into the yard.

The beds are brimming with colour and texture, currently showcasing peonies, hydrangeas, and flowering bushes, contrasting with crimson maples and Japanese forest grasses.

Taller plants and dwarf conifers are set against a background of oaks, whose branches let through enough sunlight to illuminate the garden.

The view alters by the minute as the light changes, a breeze wafts through the leaves, and  a bird or butterfly alights then flies away.

As she “paints with plants,” Mary chooses shade-lovers with a long season of colour and interest.

“You need eyes wide open or you miss the beauty that unfolds. You have to see and hear it with your heart. Everything is in harmony,” she said.

And hear it you do – the gurgling of the waterfalls and the birds singing. She calls it her “symphony of sound.” Mary is in awe of nature. and loves watching the garden unfold through the season.

Mary’s husband Bob, a local CPA, assisted with wiring the garden lighting and building the arbour, pergola and garden sheds from scratch.

Close to the house is a vegetable garden, and on weekdays she sends fresh produce to the office for staff lunches.

This garden is where she passionately creates after work and during the summer (holidays wait for winter) as Mary described her garden as a creative outlet for her living art.

For Beachers who garden in the shade, Mary recommends these plants, which she uses in her own garden. They thrive in well drained soil and dappled sunlight.