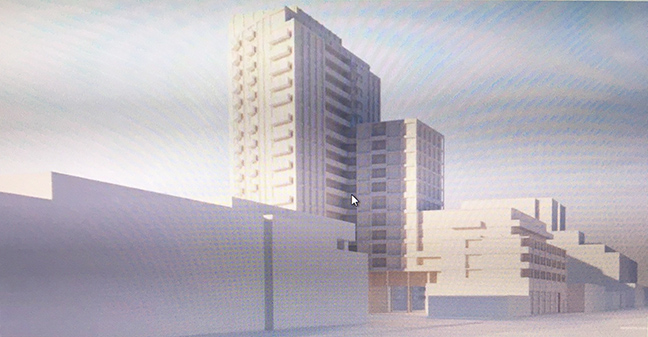 The proposal has created strong feelings as it calls for buildings on the site to be built in excess of six storeys in height, which is the limit for the area established by the Queen Street East Urban Design Guidelines.

June 10 will be the second community meeting on the proposal by Housing Now for the city-owned site at 1631 Queen St. E., east of Coxwell Avenue and west of Eastern Avenue, on the south side.

Approved by Toronto City Council, development of the site is part the city’s Housing Now initiative aimed at increasing the supply of new affordable rental housing within mixed-income, mixed-use, and transit-oriented communities.

That prompted a furious debate within the Beach community regarding the Queen Street East Urban Design Guidelines, and why or if they should be followed regarding this proposal.

The issue has created a rift, often seeming to be personal, among those who are in favour of higher buildings to create more affordable housing space and those who insist the Queen Street East Urban Design Guidelines must be followed to protect the Beach neighbourhood from future highrise projects which might use this proposal as a precedent.

“Apparently, juvenile name-calling is the order of the day,” said one resident in a note to Beach Metro News this week. The resident is worried Thursday’s online meeting is going to be a confrontational one with accusations and insults flying.

“I hope that the ‘moderator’ won’t allow it to descend to name-calling, but I doubt it,” said the resident.

Beaches-East York Councillor Brad Bradford said there is still “lots of room” for feedback on this proposal.

“The first consultation (in December of 2020) was conceptual – it was about the big planning principals. Let’s call it the scope and scale of the building,” he said.

“This meeting (on June 10) is about the details. The Housing Now project team has submitted their first planning application to the city planning department based on the feedback received so far. At Thursday’s meeting we’ll have an opportunity to go through those plans in detail.”

The Housing Now proposal is being made through the City of Toronto’s CreateTO, which is mandated to manage city-owned real estate, develop city buildings and lands for municipal purposes and provide real estate solutions to city divisions, agencies and corporations. Along with the housing proposals for 1631 Queen St. E., the Housing Now plan also calls for the expansion of the site’s Coxwell Early Learning and Child Care Centre and the relocation of the Beaches Employment and Social Services building. The east end of the site will be landscaped open space informed by Indigenous design and engagement. The landscaped open space portion of the development will be on what is now known as Kishigo Lane, a private laneway between Queen and Eastern.

CreateTO is making the rezoning application needed to get the proposal started, said Bradford.

“Like any development application, city planning must and does take the community’s feedback seriously,” he said. “The best developments in Toronto have been shaped by the thoughtful feedback of the surrounding community. I know that a community as engaged and as passionate as ours will be able to look at this proposal and give meaningful input that will shape it.”

Jeffrey Levitt, speaking for The Beach and East Toronto Historical Society, said there is great concern regarding the precedent-setting nature of this proposal and what it might establish as acceptable in the future given development pressures along Queen Street East in the Beach.

“There is accordingly a community expectation that the June 10 community meeting on the 1631 Queen St. E. development will provide assurance to the community (in a manner the community can understand) that the development will not set a precedent that threatens the existing low rise, heritage character of Queen Street East as envision in the UDG (Urban Design Guidelines),” he said.

The issue is not that affordable housing is being built on the site; that is accepted. The concern is the heights of the proposed buildings. Levitt pointed to a recent Globe and Mail article praising the balance between preserving the heritage nature of the Beach while allowing development to take place along Queen Street East.

“Looking at recent development on three of the four corners of Queen Street East and Woodbine Avenue, and further along, at the old Lick’s Homeburgers site, I think a fairly good balance has been struck; none of these 21st century condo buildings is taller that six storeys, and brick facades attempt, in a small way, to relate to the existing heritage fabric,” wrote architect Dave LeBlanc in his Friday, June 4, article in the Globe and Mail.

Mark J. Richardson, who is technical lead with a group called HousingNowTO (which is not affiliated with the city’s Housing Now initiative), said in a letter to Beach Metro News that the proposal for 1631 Queen St. E. is crucial to increasing the amount of affordable housing in Toronto.

“It is vitally important that the permitted height and density on this Queen and Coxwell location creates a financially viable built-form that would allow a ‘not-for-profit’ partner to operate at least one-third of the total units as affordable housing,” he wrote.

That means buildings on the site will have to be higher than six storeys in order to provide the needed affordable housing units, said Richardson. Numerous letters both for and against the six-storey building limit set by the Queen Street East Urban Design Guidelines have appeared in Beach Metro News this year, and Richardson referenced some of them in his comments.

“It will be impossible to do this if the flawed ‘Urban Design Guidelines’ are rigidly enforced as some Beach Metro readers have suggested,” he wrote.

“Frankly, reading letters like the ones from The Beach and East Toronto Historical Society members (April 6 edition of Beach Metro News) who suggested that ‘the Beach resembles a lake-side resort town, one that is almost surprised to find itself part of big city’ – and that “affordable housing units have been sprinkled throughout the Beach over the years’ (March 9 edition of Beach Metro News) – sound amazingly entitled and fundamentally out of touch for residents of a growing global-magnet city a deep affordable housing crisis,” wrote Richardson.

“Offering a ‘sprinkling’ of affordable housing in the Beach is simply not going to meet the needs of our fellow Torontonians,” he continued.

Richardson said the proposal for 1631 Queen St. E. is low-scale compared to other affordable housing builds in the city, and it is already making concessions to the “legacy preferences” of the community. “Any further reductions would likely kill the project outright,” he wrote.

Many in the community feel the decision has already been made regarding this proposal and that the buildings higher that six storeys will be permitted on the site.

Bradford said Thursday’s meeting is by “no means” the end of the process when it comes to this proposal.

“I hear lots of residents asking me too, ‘is this a done deal.’ The answer is no. There is lots of room for feedback,” he said.

Bradford said it is important to understood that there is a desperate need in Toronto for affordable housing buildings.

Bradford said residents should add their voices to the June 10 meeting and they will be listened to.

“I’ll be listening to the presentation and the community’s response very closely on Thursday. We need to hear the community’s input, look at it from every angle and then I will advocate for any thoughtful, practical changes we need to the plans,” he said.

“We have to move it forward. We can’t afford to wait in this housing crisis but that doesn’t mean the community isn’t still integral to the process.”

People wishing to attend the meeting on June 10 are asked to visit https://createto.ca/housingnow/housing/1631-queen-street-east/ for information on how to do so. The meeting is slated to take place between 6:30 and 8:30 p.m. and can be attended online or by phone.

For more detailed information on the June 1 development application, please go to http://app.toronto.ca/AIC/index.do?folderRsn=ReLVaGWNsUkzIi%2F2lscEPg%3D%3D

UPDATE: Some residents contacted Beach Metro News on the morning of June 9 to complain they were not able to register in advance to attend the online version of the June 10 meeting. Beach Metro News checked in with CreateTO, and was told there is no pre-registration option for the meeting for anyone. People should be assured that there is no conspiracy at work here to silence certain voices. People can simply join the meeting when it begins.

There is capacity for a large number of attendees at the online meeting and there have not been any issues at other similar meetings, said CreateTO spokesperson Susan O’Neill. Also, an even larger “button” will be up on the Housing Now website for 1631 Queen St. E. as of approximately 5 p.m. on June 10 to make it even easier and more obvious for those planning on attending the meeting online.