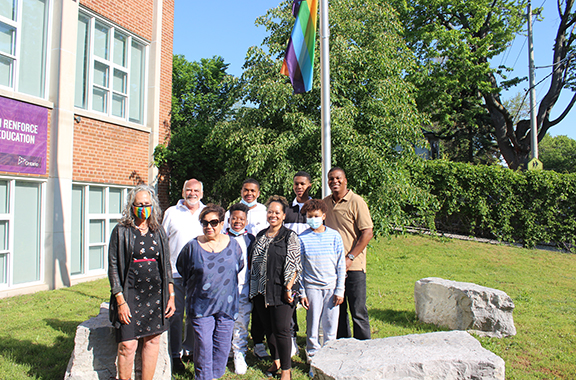 On hand for the Pride Flag raising this morning were Eloise Morrison and her family including husband Darien; sons Jayden, Jorden, Julien and Jackson; and her mother Carole Adriaans. Also in the photo taken in front of Notre Dame Catholic High School are Dave Belton, partner of Eloise's late father George; and Beaches-East York MPP Rima Berns-McGown. Photo by Alan Shackleton.

The morning of Tuesday, June 1, was an emotional one for Eloise Morrison and her family.

She was among those who attended a ceremony for the raising of the Pride Flag by the Toronto Catholic District School Board. It was a very special event for her as it also took place on the same day as the birthday of her late father George Morrison.

“It’s a pretty emotional day. This is a big deal,” she said on Tuesday morning after the ceremony.

Originally, the flag raising was slated to take place in front of St. John Catholic School on Kingston Road but it had to be moved around the corner to Notre Dame Catholic High School High School on Malvern Avenue after the flag-pole chain at St. John broke. The Pride Flag will be flying in front of St. John by June 2 at the latest, said principal David Comacchio, just as soon as the flag-pole chain can be repaired.

In memory of the Kamloops residential school victims, flags across Ontario (including those at local schools for Pride Month) will be flying at half-mast.

“There’s lots of lifted spirits and freed feelings of love and acceptance for all, for my dad and mom, for my children and me,” said Eloise. “Happy birthday to my father today, he would have been 76.”

Eloise shared her story on why today’s Pride Flag raising at St. John was so meaningful to her and her family in a Guest Column in the June 1 edition of Beach Metro News and on our website at https://beachmetro.com/2021/05/19/guest-column-raising-of-pride-flag-at-st-john-catholic-school-will-have-deep-personal-meaning-for-local-resident/

In the column, Eloise wrote about how at the age of 12 while attending a graduation celebration for students at St. John school in the neighbouring St. John Catholic Church on Kingston Road, she listed to the Bishop at the time condemn homosexuality as a crime. It left her shocked and saddened as her father and uncles were gay.

“After hearing that message, I began to feel the immense hatred from the Church towards my family, and I began to crumble on the inside,” she wrote. “This traumatic experience affected me deeply, so deeply that still to this day I find it hard to share freely.”

That was in 1987 and fortunately much has changed in the world since then. Eloise said her father would have been pleased to see a day that a Catholic school would fly the Pride Flag, and a large crowd of community members would come out to watch and applaud it happening.

“He would be hurt he went through all of that in the past, but would be happy that we know love is love,” said Eloise. “He didn’t want to put labels on people, he wanted us all to live together.”

This morning’s flag raising, which took place at schools across the Toronto Catholic District School Board, was history making. Early last month, TCDSB trustees voted to fly the Pride Flag and proclaim June as Pride Month. The decision came after trustees at another school board in southern Ontario had voted against doing so.

“This is an exciting and happy day for all of us,” said Comacchio prior to the raising of the Pride Flag. “For all of our students and parents and staff…For those here who in previous years maybe felt they did not belong; we belong and this is a symbol for all of us and we are being part of a changing TCDSB in which we all belong.”

“It was a huge shock,” said Eloise of her reaction to hearing the TCDSB had agreed to raise the Pride Flag at its schools and to recognize Pride Month.

She said she considers it an extremely important step for Catholic education in the city. “That was where we are, and this is what we are doing to make sure it does not happen again.”