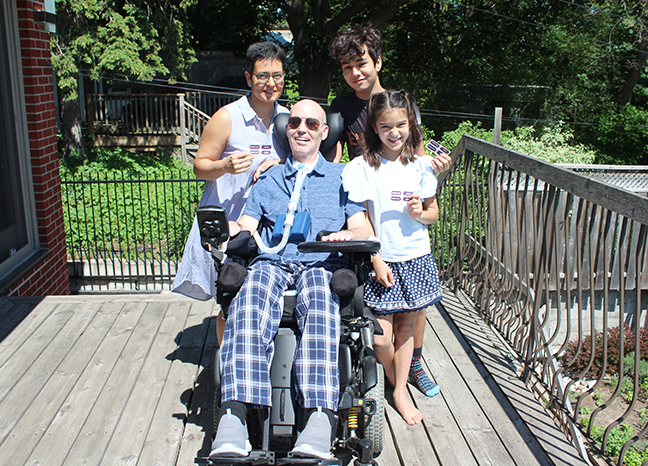 The declaration of June 2 as Lou Gehrig Day will have special meaning to a Beach family living with the realities of ALS (Amyotrophic Lateral Sclerosis also known as Lou Gehrig’s disease).

June is ALS Awareness Month and Major League Baseball is marking it with a league-wide declaration on June 2 of Lou Gehrig Day in remembrance of the legendary New York Yankees player of the 1920s and 1930s who had ALS.

Beach resident Peter Wood was diagnosed with ALS in 2015. Today he is fully paralyzed and non-verbal. However, Wood is completely aware of everything going on around him and is able to communicate by typing messages through eye-blink technology.

“ALS is a horrible terminal illness without treatment or cure. The cruelest disease,” he wrote in an email interview with Beach Metro News in late May in advance of ALS Awareness Month this June. “It takes away your abilities over time. But your mind is perfect. Your eyes and ears too – so you are stuck witnessing every minute detail of your decline powerlessly.”

Wood has deep family connections to the Beach, having lived on Kingswood Road until the age of four when his parents moved to Markham. Both sets of his grandparents lived in the Beach, with one of his grandmothers having moved here more than 100 years ago.

He and his wife Youtaz moved to the area in 2009, and now live near Southwood Drive and Kingston Road with their children Zachary, 14, and Siena, 9. Wood’s brother and cousins also live in the Beach.

Wood said his physical abilities started declining after he was diagnosed with ALS, and his family have experienced that process with him.

“I first lost my strength in my left arm. Then the right arm. Eventually, I couldn’t walk,” he wrote.

“Then my voice and swallowing were impacted. Finally breathing became an issue. Now I can’t move anything. I’m totally dependent. There are huge losses: No speaking, no walking, or holding my head up on my own, no enjoyment of food. And there are millions of little things everyone takes for granted. Being able to scratch an itch on your face or reach out to squeeze my daughter’s hand, to tell her I love her in my own voice.”

Wood, though, is determined to keep a positive attitude and to be an advocate for ALS awareness, treatment and funding to find a cure.

“I’m trapped in a body that doesn’t function. What could be worse? To survive, you need to have a purpose, be incredibly positive and look for the good in each day,” he wrote.

Wood wrote that ALS Awareness Month, Lou Gehrig Day and the upcoming Walk to End ALS are important events that help people understand more about the illness and the needs around it.

“We definitely need more funding for research. It’s been going on too long without any effective treatment to at least slow down the progress,” he wrote.
“Lou Gehrig was diagnosed over 80 years ago.”

A big baseball fan, Wood said the connection with Major League Baseball and Lou Gehrig Day is a meaningful one when it comes to ALS. “I’m happy that MLB is doing this day. I’m not a Yankees fan, but Lou Gehrig was an incredible player and human being.”

Wood said he likes baseball because it is analytical, and he is a fan of the game as opposed to one specific team.

Son Zach plays baseball, and Wood was a coach until he was physically unable to do so. “The last year I coached, I was bench coach,” he wrote.
“Siena plays soccer and does competitive dance.”

Skiing was also a sport that Wood loved to take part in, especially with his kids.

“They both ski. I love skiing: I was an avid skier. I have been all around North America to ski with childhood friends,” he wrote.

As the impacts of his ALS were taking hold, Wood worked hard to make sure he was able to help Siena learn to ski.

“Luckily that last season I had signed Siena up for lessons at age three – she was supposed to be four when we took them – she loved it. I would ski with them after the lesson. I would use my elbows to squeeze her onto the chair lift because my arms couldn’t do it. So glad I had the chance.”

Wood now plays a big role in helping schedule activities for the kids, though that has been severely limited of late due to the COVID-19 pandemic.

He wrote the restrictions and health dangers around the virus have added challenges to the family’s life.

“The kids miss activity and recreation. We all miss social interaction. The periodic visits from friends and family meant a lot to me. Virtual is good; we are so grateful for that. But it’s not the same as face-to-face.”

Also, in the early days of the pandemic it became difficult to hire caregivers. “I had a full turnover in March of 2020 right at the start of the lockdown because a lot of them worked in long-term care. I couldn’t take that risk. And they weren’t allowed to either,” wrote Wood.

He added that ALS has an impact on every member of the family, and that is something he wanted people to know.

“They are missing so much because of ALS. We don’t travel and we are restricted in activities as a family. It’s like a perpetual lockdown for us,” he wrote.
“I’m not able to participate and due to my care, Youtaz isn’t able to be away from home either for any length of time. So she can’t be out with them either.”

When asked what he and his family would like to say to community members about ALS and how they can help, Wood wrote:

“Donate as much as you can to help fund research. That is the only way to make this a treatable disease. I have experienced an abundance of support and love from friends and family members. It’s been incredibly uplifting. If you know someone who’s living with ALS, let them know that you care and support them by spending time with them.”

In connection to Major League Baseball’s actions to raise awareness, The ALS Society of Canada is promoting the message Strike Out ALS during the month of June.

Also, the Walk to End ALS will be taking place virtually on June 20, and that is an excellent way for people looking to help raise funds to make a difference.
For more information on how you can participate, go to https://walktoendals.ca/participate-or-donate/ontario/