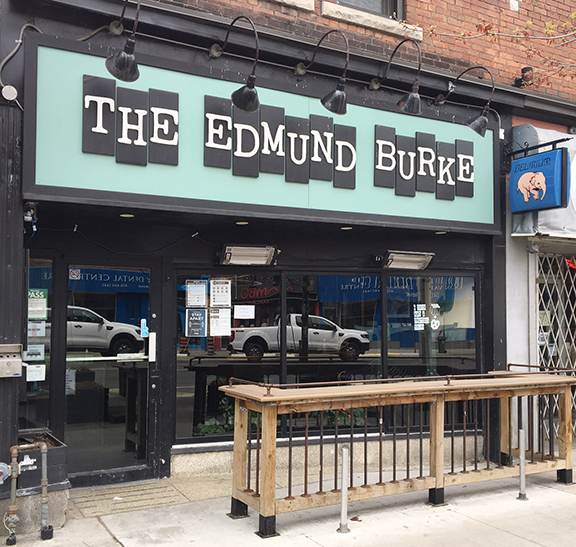 The owners of The Edmund Burke on Danforth Avenue are doing everything they can to stay afloat as COVID-19 restrictions and lockdowns continue to impact their business. Photo by Alan Shackleton.

Ginger Robertson and her husband know a thing or two about restaurants.

The industrious couple owns and operates The Edmund Burke, a popular gastropub on Danforth Avenue, and it’s been their bread and butter for five years. After a successful run with their first restaurant they chose to get a second. On March 9, 2020, they bought Off The Hook Fishbar on Broadview Avenue.

On March 17, 2020, just a week after Robertson got the keys, Ontario declared a state of emergency ordering businesses – including restaurants, bars, and cafes – to close.

After more than a year into the COVID-19 pandemic, Robertson has yet to open Off The Hook to any customers, while she and her husband do whatever they can to keep The Edmund Burke afloat.

As they endure the third wave of COVID-19 in Ontario, restaurants and small business owners in East Toronto – like the rest of the city – are expressing frustration with Ontario’s response to the pandemic, saying it’s largely been detrimental to small businesses.

“It’s always an issue requiring an immediate solution,” he said.

Cobran has spent much of the last year fielding calls from business owners registered with the BIA, and he said the calls have become more and more difficult as businesses hang on by a thread.

Meanwhile, Amr Elimam, owner of Egyptian restaurant Papyrus on Danforth Avenue, essentially follows his own health restrictions largely similar to the City of Toronto’s public health recommendations as he said he can’t rely on the province anymore.

For example, he won’t allow dine-in service until he thinks it’s safe, even if the province gives the green light.

Whether its restaurant owners on Danforth Avenue or Queen Street East, or whether it’s the city’s several BIA directors and coordinators, there is an overwhelming disapproval of how Premier Doug Ford and his government has handled the pandemic response.

The disappointment and frustration prompted former city councillor and Greektown on the Danforth BIA executive director Mary Fragedakis to seek the candidate nomination for the Ontario Liberal Party in the Toronto-Danforth riding. To say she’s infuriated with the province’s response is an understatement.

“Everyone is fed up with the lockdown theatre,” she said, adding that they were largely ineffective because big box stores were permitted to remain open or partially open for most of the pandemic.

Toronto has been under some form of lockdown or stay-at-home order since October 2020, following the first lockdown in March and April 2020.

The Canadian Federation of Independent Business called it a “failing policy” and labelled Toronto as the “lockdown capital of North America” as the city has experienced some of the longest lockdown restrictions.

“It’s gone so bad, it couldn’t have been planned this bad,” Fragedakis said.

Cobran understands the challenges for any government fighting a once-in-a-century global pandemic, but the length and duration of the lockdowns has become near impossible for business owners to bear.

He said they are caught between fighting for their physical health against a deadly virus while trying to maintain their mental health with their businesses – the fruit of their labour – in free fall.

“We’re bearing the burden of inefficiency,” Cobran said of the provincial response.  “We’ve become a sacrificial lamb. BIA members are deep in debt, even a year after this we’ll still see the effects.”

Five per cent of businesses registered with Leslieville BIA have shut down, despite many of them pivoting to online sales, curbside pickup, and takeout, while also diving into debt to keep the business alive.

Like businesses in Leslieville, Elimam is doing anything he can for his restaurant in the Broadview-Danforth BIA.

He and his staff “stayed sane” by focusing on the survival of the business instead of focusing on sales. Elimam’s main priority was to keep his staff employed while still offering service to the community.

Papyrus extended their takeout menu, like so many restaurants, but Elimam – who also cares for a disabled family member – did not wait for provincial announcements to determine his next steps.

“My frustration is not when they close down,” he said. “It’s that they’re not making the right decisions.”

“There was never a contradiction between public health and the economy,” Elimam added. “Without health and security there is no economy.”

Last summer, Elimam wrote a letter to Premier Ford, asking him to prepare for the upcoming waves and not to waste the summer.

Now, after more than 300 days without indoor dining, he and restaurants across the city have had enough.

“If this was a corporation, the whole executive team would’ve been fired,” Elimam said.

“To their credit, they moved swiftly and decisively,” he said of the federal government response to small businesses.

But the provincial support payment – the Ontario Small Business Support Grant – hasn’t been as straightforward.

Besides the sluggish website and the time to process, neither Elimam or Robertson could determine the criteria used to assess which businesses qualified for the grant.

Eligibility, according to the provincial website, is based on whether a small business experienced a revenue decline of at least 20 per cent comparing monthly revenue in April 2019 and April 2020.

Perhaps most importantly, applications for the Ontario Small Business Support Grant closed April 7, 2021, while the province still remains in lockdown into May.

The provincial criteria also excludes Robertson’s new restaurant – Off The Hook. She has no revenue from 2019 to compare to since she only bought the restaurant days before the pandemic unfolded in the province.

“Because my husband and I both own our businesses equally, we’re considered one enterprise,” she said.

Consequently, they could only receive payments as one business. So instead of two separate payments for two separate restaurants, she received one total payment which was less than $20,000.

“If I ran my restaurant the way this government runs the province I wouldn’t have a restaurant,” Robertson said. “They’ve just been gaslighting an entire industry, bankrupting a good majority of it, my burning question is why?”

Every restaurant, bar, and cafe in East Toronto that relied on the city’s CafeTO program last summer to allow for extended patios under public health restrictions received another blow when the stay-at-home order extended into mid-May.

CafeTO, described as a “lifeline” for small businesses by Beaches-East York Councillor Brad Bradford, was slated to start at the beginning of May. But now restaurants hoping for outdoor dining revenue are left to wait until the provincial stay-at-home order is lifted.

As of Monday, May 3, there have been 1,204,543 COVID-19 vaccine doses administered in Toronto. The federal government recently announced the country would receive two million doses of the Pfizer vaccine before another increase in shipments in June.

That news, coupled with the province’s announcement of expanding vaccination age requirements during the month of May, gives businesses some desperately needed hope for the summer.

“There is still optimism,” said Beach Village BIA director Paul Bieksa. “I’ve seen amazing things on how businesses have pivoted, but there’s still so much unknown.”

Bieksa, and much of the businesses over at the Beach Village BIA and even across the city, still question why the province allowed big box stores to remain open or partially open for much of its restrictions.

“It’s a resounding frustration on half measures that have extended this pandemic,” he said. “And the rules don’t seem to apply fairly across the board.”