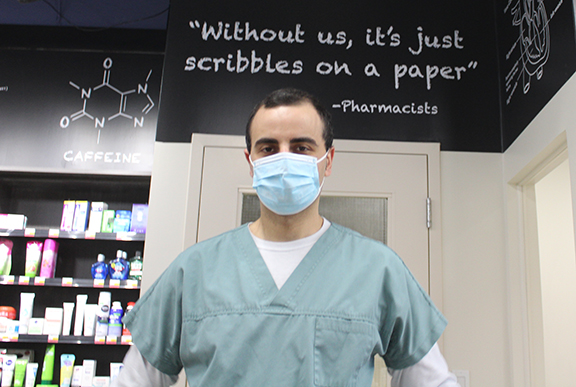 Pharmacist Kyro Maseh and the staff at the Lawlor Pharmasave on Kingston Road have gone above and beyond to make sure as many people as possible can receive the COVID-19 vaccine.

That has been especially true of his efforts to help get essential workers vaccinated.

“All pharmacists are trying to make the process as easy as possible,” said Maseh in an interview with Beach Metro News on April 29.

He said that in early April when the government allowed teachers and essential workers to be vaccinated, he saw a surge of demand among some very frightened people.

“What I saw with the frontline workers and teachers was a tremendous amount of fear then gratefulness. They did not feel safe going to work. They were grateful and now they feel protected,” said Maseh.

“People want to live and they want to stay out of hospital.”

Maseh said he has vaccinated 1,100 people at the independently owned pharmacy since first receiving doses of AstraZeneca in mid March.

Earlier in April the pharmacy celebrated giving out its 1,000th dose of vaccine.

“Things took off when we celebrated the 1,000th dose. That went viral. It was a nice way to celebrate and raise spirits of the staff and the people getting vaccinated,” said Maseh.

However, the pace of vaccinations has slowed as supply continues to be an issue, and Maseh said he has not delivered a single dose for a week since he has no more vaccine available at this moment.

“I have no idea when the next shipment will come in. We have to go with the flow. We know the supply exists, but not when it’s coming in,” he said.

The Lawlor Pharmasave has more than 3,000 people on its waiting list for a COVID-19 shot, and Maseh said they will be notified when new shipments of vaccine arrive. He pointed out that of those 3,000, many have managed to get shots elsewhere already or have upcoming appointments somewhere else.

Being an independent business made it easier for his pharmacy to shift priorities and help those most in need, he said.

“A lot of people are booking through the government, but they take a long time. We are an independent business and that has been an advantage for us.”

While waiting for his next delivery of vaccines to arrive, Maseh said he is feeling optimistic that the end of the COVID-19 pandemic and its impacts on Ontario is getting nearer. For that, he said, the thanks must go to the vaccines.

“The pandemic’s end is approaching. I really feel the end is nearing. We can see examples of it. Israel is again fully opening thanks to vaccines. England expects to be opening by June and just today New York City said they will be open again by July 1. This could be us. We’re getting there. Just make sure people the majority of people are getting shots in their arms for herd immunity.

“I feel we can do this sooner than Europe that is aiming to be fully open again in September. We have much less population than Europe,” said Maseh.

“We have to leverage all our resources for vaccinations, and it’s all hands on deck.”

He’s also pleased with the news Pfizer vaccine will reportedly be made available to Ontario pharmacists in the near future. However, he said the plan to distribute it is favouring large pharmacies and chain stores.

“Pfizer is supposed to be coming for pharmacies but so far a lot of favoritism is being shown.”

In a note sent to Beach Metro News, the mother of an essential worker at a local grocery store said Maseh is a “hero” for his devotion to the community and the long hours he spent vaccinating people who showed up for a shot.

“He deserves recognition for his initiative and devotion to this neighbourhood,” she said.