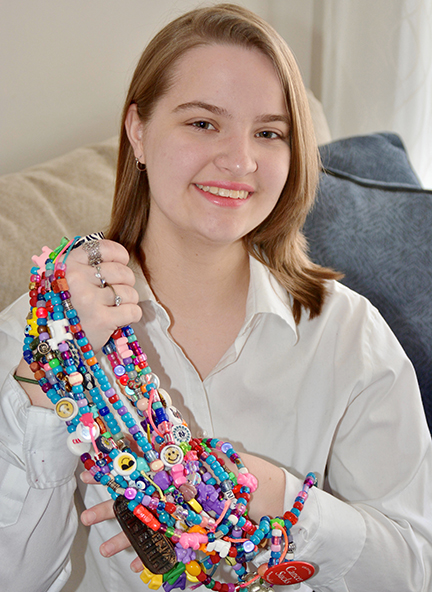 East York's Helena Kirk helped prompt the federal government to announce increased funding for childhood cancer treatments and research in last week's budget. Kirk, who underwent 841 days of chemotherapy treatment in her battle with leukemia, is shown with her "bravery beads" which she received after treatments. Photo: Submitted.

An East York teen played a key role in the increased funding for pediatric cancer treatment announced in the federal budget last week.

The advocacy work by Helena Kirk, 15, who successfully battled leukemia as a child and became a powerful voice for young people undergoing cancer treatments, was recognized in the April 19 budget delivered by federal Finance Minister Chrystia Freeland.

The budget earmarked $30 million towards pediatric cancer research and treatment over the next two years.

“I am thrilled that it is finally in the federal budget because I have been advocating very hard for over four years,” said Kirk in an email interview with Beach Metro News this week.

“I have lost nine friends to cancer and it is unbearable to know they died when there were trials or treatments that could have helped them.”

Beaches-East York MP Nathaniel Erskine-Smith said Kirk’s hard work letting politicians know the importance of funding cancer research and treatments for children was critical in it being part of this month’s federal budget.

“There is no question that the budget commitment is a direct result of Helena’s strong advocacy and hard work,” said Erskine-Smith in a statement.

“I remember meeting Helena for the first time a number of years ago, and we talked about next steps and strategy. She then worked to bring together dozens of cancer care organizations and pediatric oncologists to call for action, and I was glad to support those efforts and help to ensure that her message was heard in Ottawa,” he said.

Helena was diagnosed with acute lymphoblastic leukaemia when she was three years old. What followed was a long treatment process that included 841 days of chemotherapy.

During that time she collected “bravery beads” with each one representing a chemotherapy treatment.

“It was a very long journey. It was a very horrifying journey in many ways, but Helena was a real champion through it—very brave,” said her mother Sarah Calderwood in a 2018 Beach Metro News story about Helena’s advocacy for pediatric cancer funding.

Kirk said the funding in the federal budget is “exactly what we asked for and that is wonderful.”

Specifically, the federal funding proposed in the budget will go towards a national childhood cancer strategy; increased access for children to trials and treatments regardless of where they live in Canada; and for research into childhood cancer priority areas.

Starting in 2021-22, the federal monies are being designated to the Canadian Institutes of Health Research to fund pediatric cancer research “that can lead to better outcomes and healthier lives for these young patients,” said the budget document. “The funding will support promising research projects with the greatest potential for fighting pediatric cancers.”

Kirk said work on making changes to the way children’s cancers are treated and researched in Canada through a national strategy is also ongoing, and funding for that is an important part of the federal budget announcement.

“Given that cancer is the Number One cause of death by disease in Canadian children, it is tragic that we have never had a strategy for everyone to co-operate to achieve,” she said.

Childhood cancers are different than other kinds of cancers and must be treated and researched as such, Kirk said.

“The youngest Canadians often get different cancers than adults and they are still developing. They need specific focus and expertise,” she said.

“Also, many people don’t realize that there have only been about half a dozen cancer drugs approved for cancer kids in Canada in the last 40 years. For instance, I went through 841 days of chemo and not one of my drugs were approved by Health Canada for patients under 18. Also, the drugs Terry Fox had for his osteosarcoma 40 years ago, are the same drugs that are still used for young cancer kids today.

“Many millions have been spent on cancer research, but not enough has gone to cancers to childhood, adolescent and young cancers.”

Kirk said her advocacy work, which she started at age 11 with the support of her parents, has been taken up by many families of children with cancer, doctors and researchers.

“What has been amazing is that over time so many people have joined me in my advocacy work and contributed so much,” she said. “I could not have done it alone. In the end, over 150 families across Canada, over 30 pediatric cancer researchers and clinicians added their voices and expertise to drive this forward.”

Sarah Calderwood said it was indeed a team effort that led to the federal budget announcement.

“Helena certainly didn’t do this alone, but she was the leading voice and the face of this campaign. She was fearless in her approach because she was so desperate to get these changes to help her friends who were still fighting and running out of treatment options. As she met with the leaders of this country, I could see how her telling her story and the story of her friends opened the hearts and minds of everyone she talked to,” said Calderwood.

A Grade 10 student at Leaside High School, Kirk has been attending online classes since the start of the COVID-19 pandemic last year.

Like many teens across the country, she’s finding the social isolation that has been brought about by COVID-19 to be a challenge. “The hardest part is that I can’t see my friends. Luckily, I have been able to see my best friend Illyana for outdoor skating, walks or playing online games together.”

Kirk said that what is a challenge for most young people during the pandemic is a much bigger issue for those also dealing with cancer.

“COVID is harder for cancer kids, especially those that are in treatment and have compromised immune systems,” she said.

“When I was in treatment I spent a lot of time isolated because my immune system was so weak. The threat of COVID makes everything so much harder, scarier and lonelier. This might sound strange, but the thing I hated the most of my 841 days of treatment was not the pain or the fear of treatments, but the loneliness I endured for days and weeks.

“Cancer kids during COVID are even more lonely now and it has been that way for months, for over a year. That is crushing to a child because all you want is to play with your friends and be a normal kid.”

For more information on Helena’s Hope, please go to https://helenashope.com